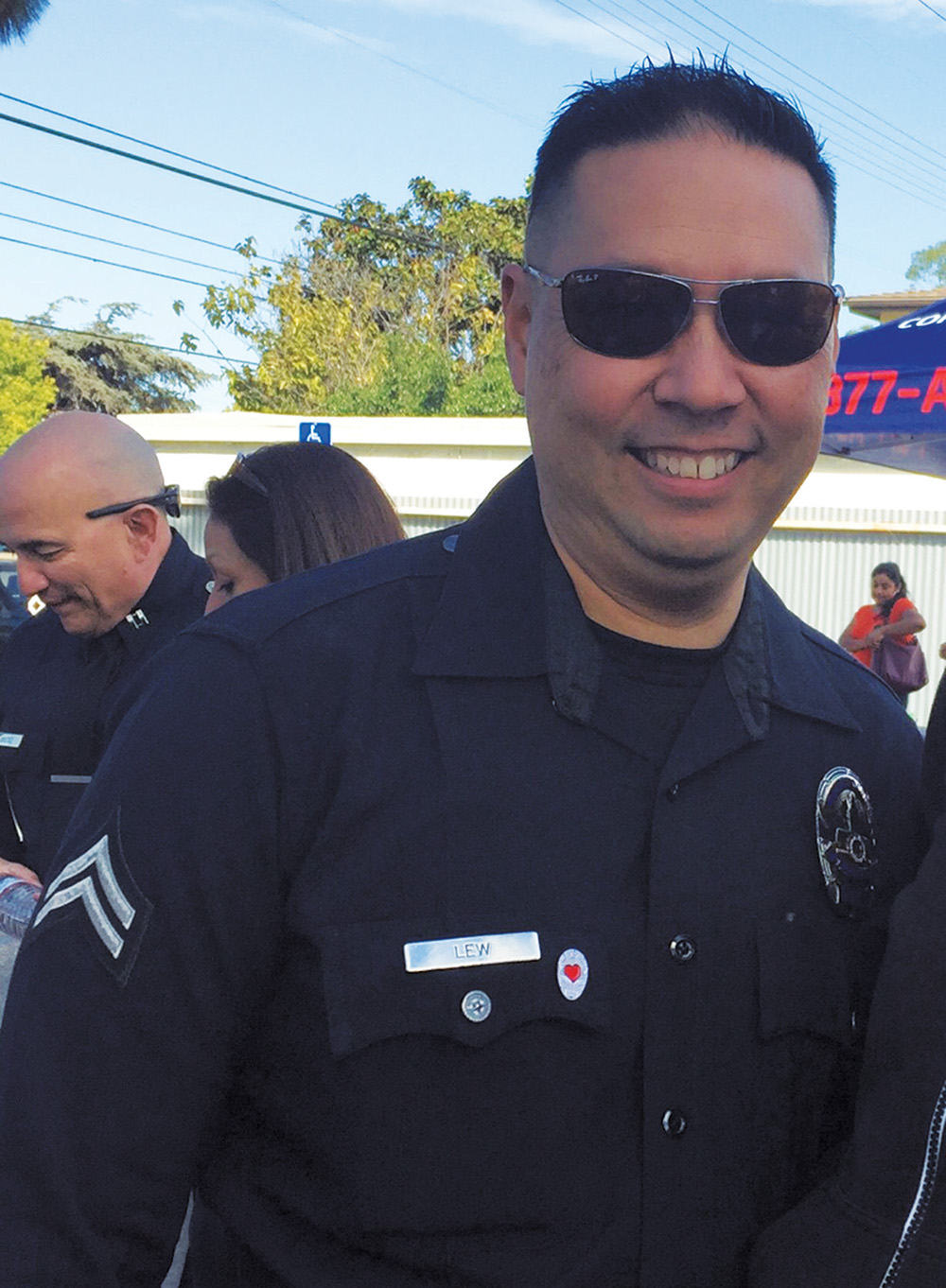 “When I was growing up, my father had two, sometimes three jobs to put food on the table and a roof over our heads. Those are the families I see often when I patrol,” he says.

Officer Lew, who grew up in Westchester, will be honored later this month as the Westchester Rotary Club’s Citizen of the Year for his work as the founder and executive director of Badge of Heart. The nonprofit organization is dedicated to “connecting officers with the proper aid to directly help those in need or victims of crimes, who are facing physical or financial burdens” in the Pacific Division, which includes the areas of Westchester, Playa del Rey, Playa Vista and beyond. 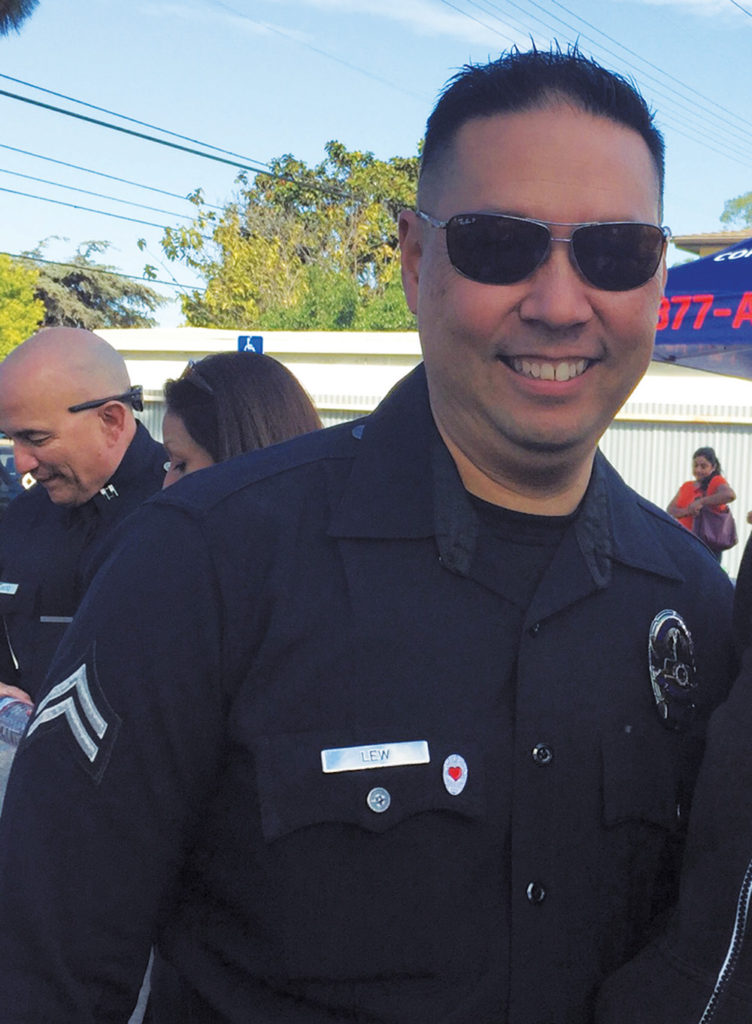 Officer Lew is the Westchester Rotary Club’s Citizen of the Year.

The Westchester Rotary Club selects just one person each year to give its highest honor, and after Lew spoke to the club about Badge of Heart at a lunch meeting last year, the decision was a no-brainer.

“Rotary’s motto is ‘Service Above Self,’” says Rotary Club President Christa Ramey. “Officer Lew exemplifies this motto in both his chosen profession of law enforcement, and of course, in the founding of Badge of Heart. The moment I met him, I told him he had the heart of a Rotarian!”

Since its founding in 2014, Badge of Heart has supported more than 1,300 families with resources such as food, clothing, and other essential items, which help provide immediate relief and allows these families to reach a place of stability.

“I’m here to help families that are having two or three jobs, single moms, folks like that,” says Lew. “These folks are doing the best they can.”

Lew has been an LAPD Officer for more than 27 years, working in the divisions of Newton, the 77th Division, South Bureau CRASH, Central and currently the Pacific Division. He says he came up with the idea for Badge of Heart on his downtime.

“It just hit me,” he said. “I want to start a nonprofit helping families that I come across and try to provide some assistance and have them move forward.”

Christina Davis, secretary for Badge of Heart and President/CEO of the LAX Coastal Chamber, knew immediately that she wanted to help Lew enable officers to aid those they meet during the approximately 5,000 calls for service that the LAPD responds to every day. She knows that compassion can go a long way for people who are suffering.

“His mission is such a powerful one,” Davis said. “The people he impacts are in a place of desperation and extreme hardship, so when he comes in and helps, that act of kindness means the world to that individual.”

Last year, Lew attracted national attention when he created a GoFundMe page to raise money for Ariel Carmona, a college student he met while on patrol in Playa del Rey.

Carmona was struggling to make ends meet after his single mother was diagnosed with cancer, so Lew promised to help him. More than $60,000 in donations was raised, which were put into a medical and education fund for the family.

For Lew, the decision to help was easy.

Badge of Heart’s signature event, the annual Turkey Giveaway on the Saturday before Thanksgiving, helps feed low-income families during the holiday season. Last year was the organization’s second annual giveaway, and for Lew, it’s not just about raising money; he’s also very hands-on. Along with board members and volunteers, Lew helps pass out the meals to the deserving families.

So far, he has been able to feed 900 families in need at the giveaways, which were identified by reaching out to local churches and schools in Westchester, Venice and Mar Vista. This fall, he hopes to feed another 500 families.

In an effort to promote education and help low-income students, Badge of Heart has also provided at-risk fifth graders with backpacks filled with school supplies. Lew and other officers identify the at-risk children through engaging with local communities and meeting families while on patrol.

The trust built between officers and individuals, especially during these interactions, has the potential to create stronger communities, says Miki Payne, Giving Liaison for the Drollinger Family Charitable Foundation (DFCF).

“It helps kids and their families feel that the police department and officers are their friends; they are a source of comfort and help, and they are working every day to give us all a better quality of life,” she says.

“Ken, like many of us, had an idea, and wanted to enhance the world, and he actually went out and did it,” says Payne, who works with Badge of Heart on behalf of DFCF and recently accepted a position on its Board of Directors.

Lew said he is humbled to be receiving the Westchester Rotary’s Citizen of the Year honor on Saturday, April 22. The Mad Men-inspired event will feature dinner, entertainment and a live auction.

“I’m honored and I’m very grateful for it,” said Lew.

Want to get involved?

On Sunday, April 30 Badge of Heart will host its Third Annual Car Show Fundraiser from 10 a.m. to 3 p.m. at the Ahmanson Recruit Training Center, located at 5651 W. Manchester Ave. in Westchester.

The event will feature a live band, DJ, food trucks, LAPD displays, raffle prizes and more. The Car Show is still looking for sponsors and donations.

For more information about how to get involved with Badge of Heart or its upcoming Car Show, please visit badgeofheart.org.