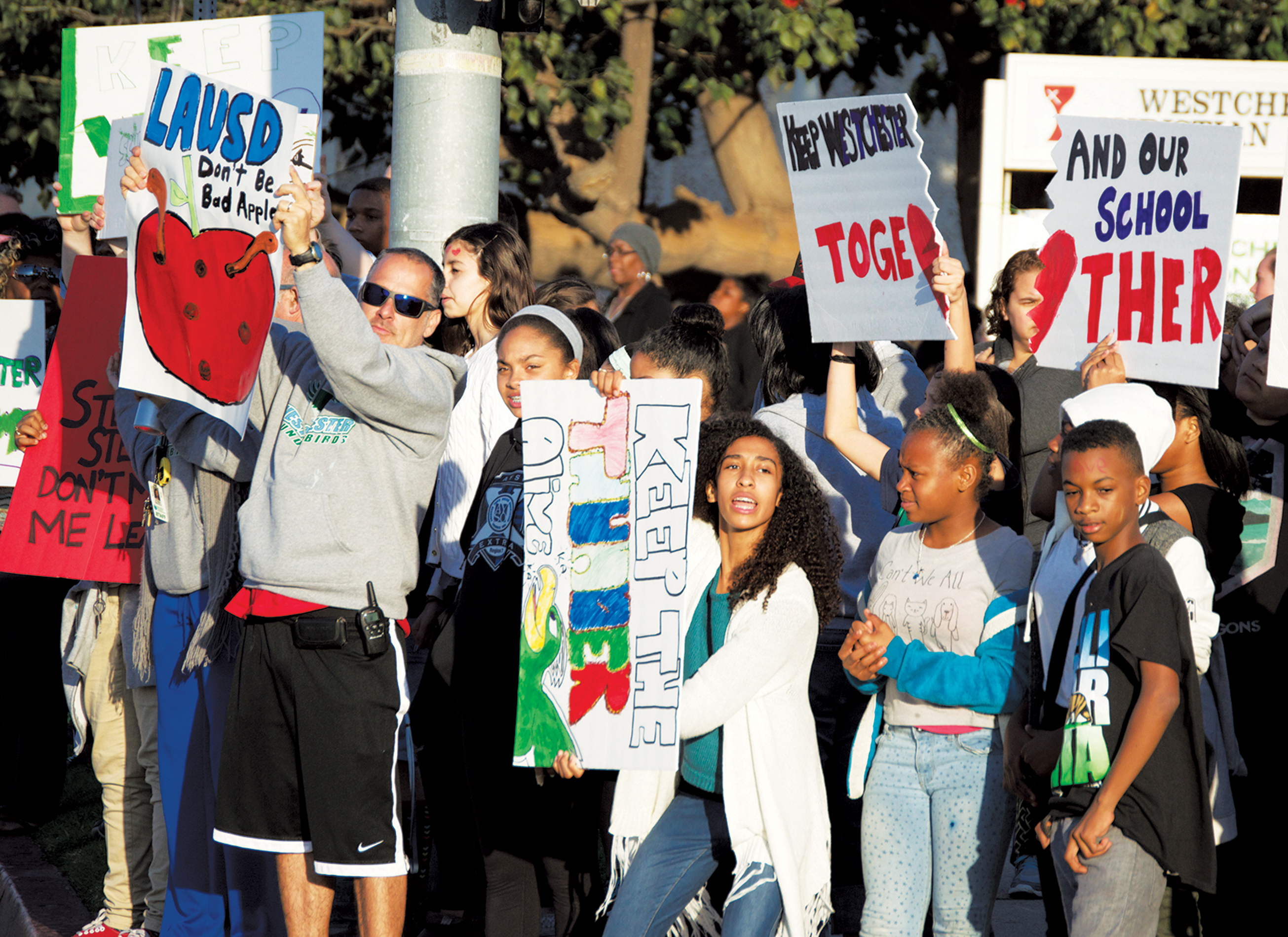 Dozens of parents, students and community members crowded the sidewalks in front of Westchester Secondary Charter School (WSCS) for a rally on February 25 to create awareness about the school’s potential move from its location in the heart of Westchester.

The school was founded by Janet Landon and Ann Wexler to provide a community-based secondary “span” charter school that targets the student population in Westchester and other communities that have typically attended Westchester schools including Playa del Rey, Ladera Heights and View Park-Windsor Hills. Since opening in 2013, the school has been located on a private campus at a Westchester church. The property at 8820 Sepulveda Eastway was recently sold, however, and will be made into an apartment building leaving the school looking for a new location for its 2015-2016 school year. While the school requested space at a Westchester campus through Prop 39, a state law that requires school districts to share available space with charter schools, they were instead offered space at Crenshaw High School.

At the rally, supporters chanted slogans like “Steve, Steve, don’t make us leave” in reference to LAUSD School Board Member Steve Zimmer and others carried signs accusing the school district of being a “bad apple.” The bottom line for those in attendance was that WSCS’s home is in Westchester and moving the campus some 7 miles northeast of its current location would be detrimental to the school and its 300-plus students in grades 6 through 10.

“We’ve had a phenomenal experience here,” said Andy Inkeles a WSCS board member and parent of a seventh grader at the school. “It’s a big deal to pull a school designed for this community, out of the community. My kid rides his bike to school, but he can’t do that any more if it’s seven miles inland. The school and the teachers are amazing. The challenge will be the distance. I’m worried so much of what has been built will be lost.”

Inkeles, like Landon, would like to see the school relocated to Westchester Enriched Sciences Magnets (WESM) or perhaps Emerson Adult Learning School located at the corner of Emerson and 88th Street.

Currently, WESM shares its campus with two other charter schools, but Landon has been fighting for space at the high school since WSCS ’s inception. While the district has claimed there is not enough space on the campus, Landon contends there is enough room for WSCS, but classrooms are being used for storage or are being hoarded.

“We need a good colocation and we believe Westchester High School is an ideal place for us. We have a lot of resources to bring to that place,” said Landon. “Schools have empty spaces but are turning classrooms into college centers, student government rooms and storage. Schools are spreading out with more space and Prop 39 is designed to ensure that excess classrooms are used for instruction.”

Although she knows it will be an uphill battle, Landon is not backing down or giving up when it comes to fighting for her school and feels LAUSD offering them space away from Westchester is politically motivated. The charter was originally denied approval by the district before being approved by the Los Angeles County Office of Education in June 2012. The school also filed a lawsuit in 2014 against the district for not offering them enough classrooms and not doing their due diligence to explore classroom availability in the Westchester area. The lawsuit is currently in the appeals process.

LAX Coastal Chamber Education Committee co-chair, Gwen Vuchsas, agrees that the district is not being fair when it comes to WSCS.

“The picture is much bigger than what’s going on at this campus,” said Vuchsas. “Westchester people started this school for Westchester students. It’s intended to be in this community, not somewhere else. It’s not right.”

For now, the strategy is to continue to build support for keeping the school local. WSCS received unanimous support from the Neighborhood Council of Westchester/Playa board at its March meeting and the school hopes to enlist the support of Councilman Mike Bonin in its efforts.

With 60% of its student living in Westchester, Playa del Rey and surrounding areas, the concern for Landon is losing students and families who won’t travel to attend a school out of their community.

“My concern is that I could lose about fifty percent of my students. There aren’t enough kids in that area to replace enrollment and, frankly, we were designed to utilize Westchester’s resources,” said Landon. “We want to be a community school and want parents involved. “

The school has another rally scheduled for Wednesday, March 11 from 4 to 5 p.m. in front of the school. They are also asking for the community’s support in writing letters to Councilman Bonin and School Board Member Steve Zimmer. Sample letters are available at savewscs.org.

“We want to do what’s best for all kids. We have 300 kids here who have really formed a lovely community and get a lot of support they have come to depend on,” said Landon. “I think we owe it to them to at least make an effort to get a solution for the sake of these children who are working hard to learn and be in a community together.”