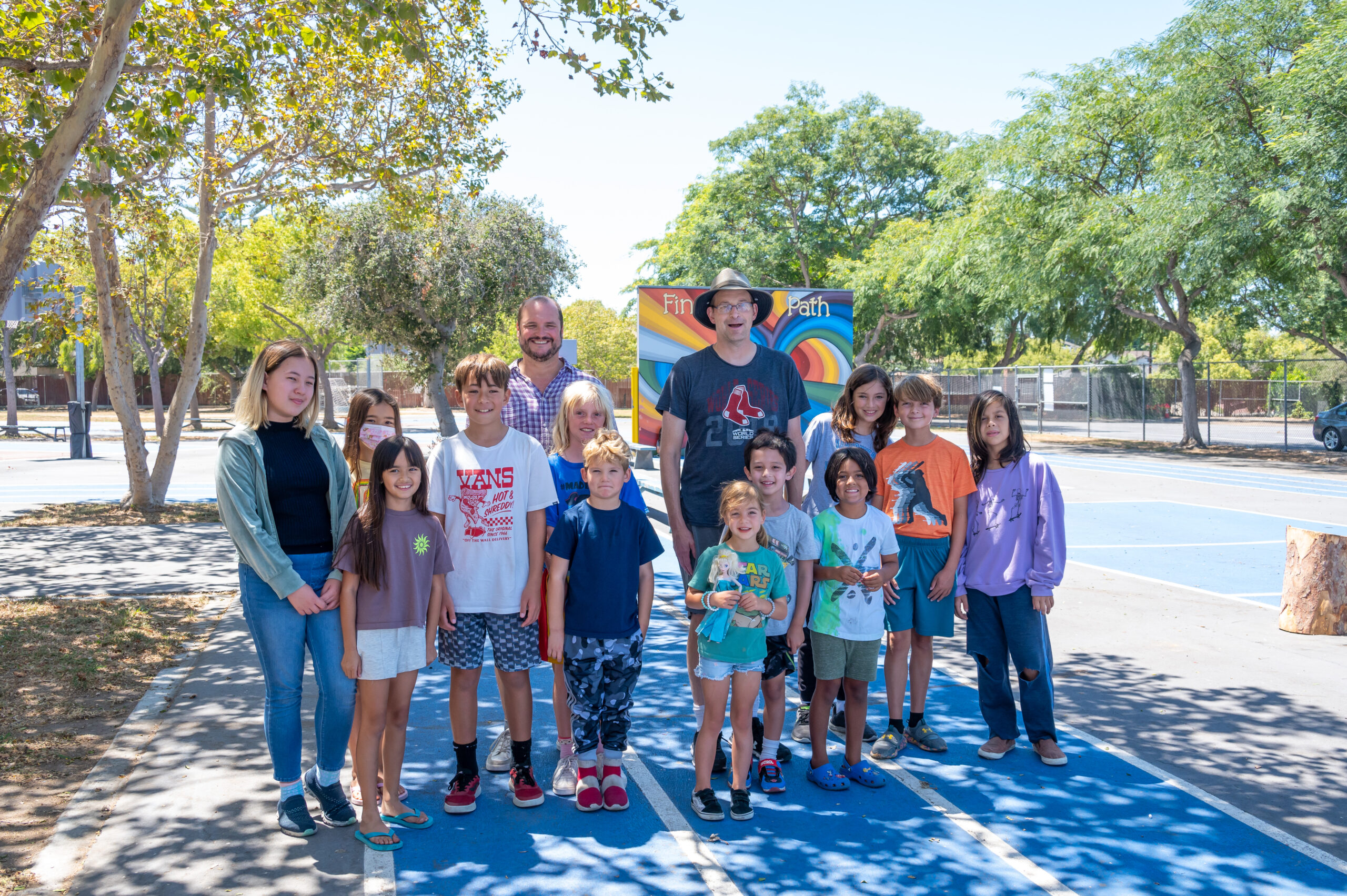 It’s a Saturday, and dozens of children are laughing and running all over the colorful playground equipment at Open Magnet Charter School in Westchester’s Osage neighborhood. Katelyn Kimoto, 4, is among them, zipping gleefully down a slide.

This is the little girl’s weekly routine now. She’s only missed one Saturday since the schoolyard opened to the public on July 9 as part of a Schools as Parks pilot program to allow recreational use outside school hours.

“It’s been great,” said Katelyn’s mother, Jia Kimoto, who lives nearby. “We can walk over. She’s making friends. It’s better than just being cooped up in the house, and we’ve met neighbors we never would have had the chance to get to know otherwise.”

Through a partnership between the Los Angeles Unified School District (LAUSD) and the Los Angeles Neighborhood Land Trust, or LANLT, the roughly one-acre recreational area of the campus is open to the public 10 a.m. to 4 p.m. on Saturdays through October 22. Visitors can use the playground, basketball courts, picnic tables and other facilities by entering from Osage Avenue between W. 78th and W. 77th Streets. The district prohibits dogs and skateboards on its property, but recently announced scooters are allowed.

Initial funding is from a $10,000 donation from Councilmember Mike Bonin, a $5,000 donation from the Drollinger Family Charitable Trust, and $5,000 from the Neighborhood Council of Westchester/Playa, or NCWP, an advisory group to the Los Angeles City Council made up of community members. The money is being used to pay for LANLT administrative costs, liability insurance, janitorial services and the salaries of two LAUSD staffers. It was a condition of the school district that at least two employees be present during weekend recreation hours.

Backers of the pilot project are in talks with the City of Los Angeles Department of Recreation and Parks to take over ongoing funding if all goes well and the program continues beyond October.

Andy Sywak, who serves on the NCWP Education Committee and has two children enrolled at Open Magnet, spearheaded the push to open up the campus when classes are not in session.

Sywak said he loves his neighborhood, but was struck by the lack of parks in the area when he moved there in 2011.

“It was the first time in my whole life I hadn’t lived within walking distance from a park,” he said. “Then I became aware that there were other places that allow people to play on their schoolyard playgrounds when school is closed, so one easy solution was to make that happen here.”

In April 2018, the city partnered with LAUSD to launch the Community School Parks program at four school sites across the city. Plans call for adding five middle schools by the end of the 2022-23 school year and possibly phasing in other campuses later.

“I’m thrilled that Open will be opening its gates to provide a new community park on the weekends,” said LAUSD Board Vice President Nick Melvoin. “I’m a major proponent of green space, outdoor learning and opportunities for school-community partnerships, and I’d like to see more of our campuses open beyond school hours for community use.”

Melvoin added that he’s grateful to the Open Magnet community and NCWP for their collaboration on the initiative and hopes it can be a successful model for others.

About half of Los Angeles County residents cannot walk to a park from their homes, and in low-income communities that number rises to about 70 percent, said LANLT Executive Director Tori Kjer.

“In communities like Westchester, there just aren’t enough parks, and we really see schools as an opportunity to have open and accessible play spaces for neighbors,” she said. “This was initiated by the community, and people are really excited about it.”

But for schools to do double duty as parks, they need to be “softer, cooler spaces,” according to the Trust for Public Land. As part of its Community Schoolyards initiative, the trust has removed asphalt from nearly 300 schools across the country in favor of trees, plants and gardens. Dubbed “28×28,” the initiative has a goal of greening 28 LAUSD sites by 2028.

The effort continues even as the city and state plead for water conservation amid an ongoing drought.

Not having green campuses can be a health issue because the heat island effects of playing on asphalt in high temperatures can be dangerous to students, Kjer said, not to mention the mental health benefits of having more serene surroundings.

“Just because there’s a drought doesn’t mean we should be cutting back on greenery,” Kjer said. “We just need to be strategic about it.”

That means landscaping with native trees and plants that don’t require much water, capturing rainfall that currently runs down storm drains into the ocean and being smart about where the limited water supply is used, she said.“

“We’re watering a lot of locations that people can’t use, like medians,” Kjer said. “Do we really need trees on medians?”

LANLT is one of the organizations in the Living Schoolyards Coalition, which also includes the Trust for Public Land, Tree People, Occidental College, Northeast Trees and others. Francesca de la Rosa is the manager of the group’s Los Angeles Green Schoolyards campaign.

The city is way behind on this issue, she said, noting that New York City has been opening school playgrounds to the public for about 30 years.

What Los Angeles needs is a “comprehensive, scaled up greening program” to add shade and outdoor learning spaces on campuses that experience extreme heat for most of the school year, and to make sure families in neighborhoods without parks have access to those “greened and transformed campuses,” de la Rosa said.

“There is a school in every neighborhood. Almost 150,000 Angelenos would have greater access to open space that they currently do not have,” she said.

Sywak would like to see more schools transformed into part-time parks, too.

“It took a long time to get ours going,” he said. “It was really clawing my way in the forest. But now there’s a roadmap. We have a model in place, and this needs to happen all over Los Angeles.”

A grand opening for the park will be held on Saturday, August 13 at 11 a.m. and the community is invited to attend.