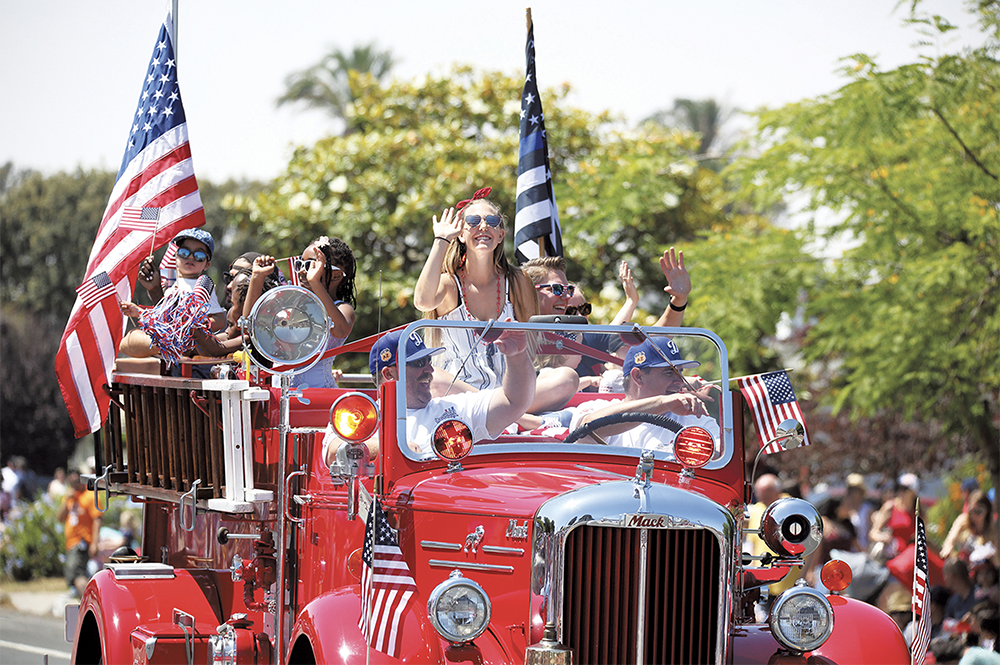 One of the best things about Westchester is its small town community feel and almost nothing exemplifies this better than the community’s annual Fourth of July Parade. A little slice of Americana, for the last nineteen years the LAX Coastal Chamber has organized the parade, which welcomes thousands of local and international spectators who flock to Loyola Blvd. to celebrate our nation’s birthday.

“Even though we’ve put on this parade for almost two decades, we’re still blown away by how many people come out to celebrate with us every year,” said Chamber President/CEO Christina Davis. “It’s great to see so many familiar faces year after year, and we love seeing guests from all over the world who hear about the parade and get to experience what it’s like to celebrate the Fourth of July in Westchester.”

This year, the parade’s 50 participants were tasked with creating floats and entries with the theme “Cities Across America,” suggested by LMU’s Community Relations Director, Andy O’Reilly. What you’ll see during parade day are floats representing some of America’s best and most beloved cities from Honolulu to New York City and plenty of places in-between.

“Our country is made up of so many great cities, each with something unique to offer, and we’re excited to see how our participants pay tribute to them during this year’s event,” said parade chair Gwen Vuchsas. “Everyone has a favorite city, so we hope a few of those are represented on parade day!”

Parade favorites like the Great Pyrenees, Westchester Lutheran and the Inglewood High School Sentinel Band are back again this year to march the .75 mile route, and the parade committee is happy to have newcomers Kentwood Elementary School, St. Mark’s Catholic School and the Serra Drumline. As is the parade tradition, floats will be judged before the parade in the categories of “Best Overall,” “Spirit of the Parade,” “Chairman’s Award” and “Mayor’s Award.”

Organizers are also honored to have WWII veterans riding in the parade as the Grand Marshals, organized by nonprofit organization Honor Flight Southland.

“These veterans are American heroes, and it’s so important that we honor them,” said Davis. “There were 16 million Americans that served in WWII, and now there are only roughly 500,000 still alive, so there’s no time left to lose to salute these brave men and women.”

The 19th annual LAX Coastal Fourth of July Parade will take place on Wednesday, July 4 beginning at 11 a.m. down Loyola Blvd. from Manchester Ave. (Westchester Park) to LMU. Sidewalk seating is available along the street on a first come, first served basis, and a limited number of bleacher seating is also available at the parade’s center stage at Loyola and 83rd Street. To reserve a prime viewing spot for the approximately one and a half hour event, organizers recommend arriving with your chairs and blankets between 10 and 10:30 a.m. The most popular viewing locations along the route (Loyola Blvd.) are near the announcer booths at the parade start, 83rd St. and 80th St. This year’s announcers include Geoff Maleman, Larry Israelson and Jon Runkle.

For more information on the parade, please call the LAX Coastal Chamber at (310) 645-5151 and view our parade program starting on page 9 of the July issue.