Early Westchester/Playa of land and air 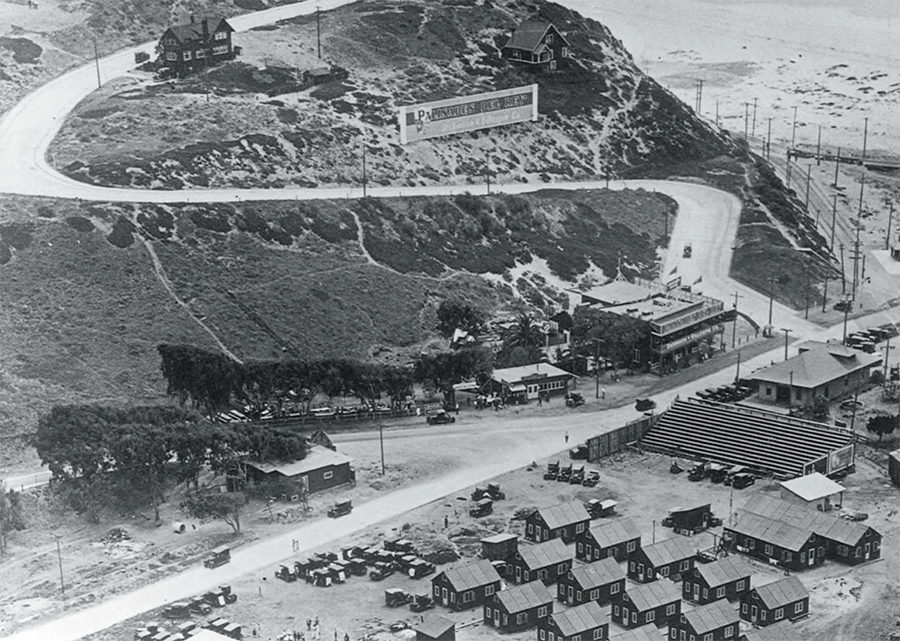 For those of you who have joined my time travel machine journey prior to the holiday season, we are again jumping on board to travel through time. Standing in the midst of today’s Westchester/Playa community, our travels initially took us all the way back to 65,000 BCE. We last explored the first actual development of the region, from the late 1800s through the turn of the century into the very early 1900s, where three separate recreational developments were built over time around the Playa del Rey Lagoon. All were destroyed early on by fire, coincidentally, but at different times.

Our time machine has been waiting patiently to resume the travel forward toward the future land development of the area. It is 1912. We are witnessing the first of many air races at Mines Field, a small airfield set in the rural outskirts of the city. It has not yet been purchased by the City of Los Angeles or become the city’s commercial air port. It is located at what is now the eastern edge of the footprint of modern day LAX.

We have now sped forward and stopped in the 1920s, where we see a young Fritz B. Burns, just 22 years old, who has been sent by a midwestern real estate development company to open the Dickinson & Gillespie Land Office. He is here to lead a sales force of 100 men in the area we now know as Playa del Rey. It is to be developed as Palisades del Rey. The sales promotion is targeting the Hollywood elite and is focused on the development of a “Riviera” community. Celebrities such as film director Cecil B. DeMille and actor Charles Bickford are among the area’s homeowners. The Del Rey Lagoon is to become a yacht harbor for the prestigious residents. Burns introduces aerial advertising and capitalizes on the use of airplanes to fly banners over the skies of Los Angeles. The land parcel is sold to the owner, who will build their own individually designed home, with the one caveat that their house exteriors can be made only of stucco, brick or stone. Framed structures are prohibited. Some of those homes still stand in Playa del Rey today.

The land sales office for Palisades del Rey also still stands, and today is home to Tanner’s Coffee Co., as well as Flowers By Felicia, among others. It is located where Culver Boulevard makes its turn south and becomes Vista Del Mar. Surfridge development sat on the cliffs above what is now Vista del Mar. Both developments were selling land parcels, without a promise to build. At the time, the coastal road Vista del Mar did not exist, but rather held the railway tracks coming in from downtown Los Angeles, through the wetlands, then turning south to Redondo Beach. Development was unexpectedly and dramatically interrupted by the onset of the plunge of the stock market into the crash of Black Tuesday on October 29, 1929.

Recapturing our time machine visit to 1912 and the beginning of our local rich history surrounding aviation, the Westchester/Playa Historical Society (WPHS) is currently hosting its Aviation Exhibit at the WPHS Discovery Center. The exhibit is open to the public on Sundays from 9 a.m. to 1 p.m. through March 6. Among the famous aviators visitors can learn about are Kevin Chilton, who grew up in Westchester and graduated from St. Bernard High School. Chilton is a retired four-star general, NASA astronaut and was the pilot for the Space Shuttle Endeavor. On February 13, visit the Discovery Center to watch a video celebrating the contributions of Bessie Coleman, the first African American female aviator.

On the exhibit’s closing weekend, the Westchester Playa Historical Society will co-host a book signing with The Book Jewel highlighting pilot Ken Curry, a Westchester High School graduate who was awarded national honors for his heroism in Vietnam. Save the date for that March 5 event.

Once again, stayed tuned for our continuing time machine travel.

Cozette is an attorney and lifelong resident of Westchester. She is the President of the Westchester/Playa Historical Society. Together with a group of dedicated volunteers, the organization is working on creating new programming and events to celebrate the history of the area and engage the community in preserving it for future generations.