Gillis heads to the beach for its 45th anniversary 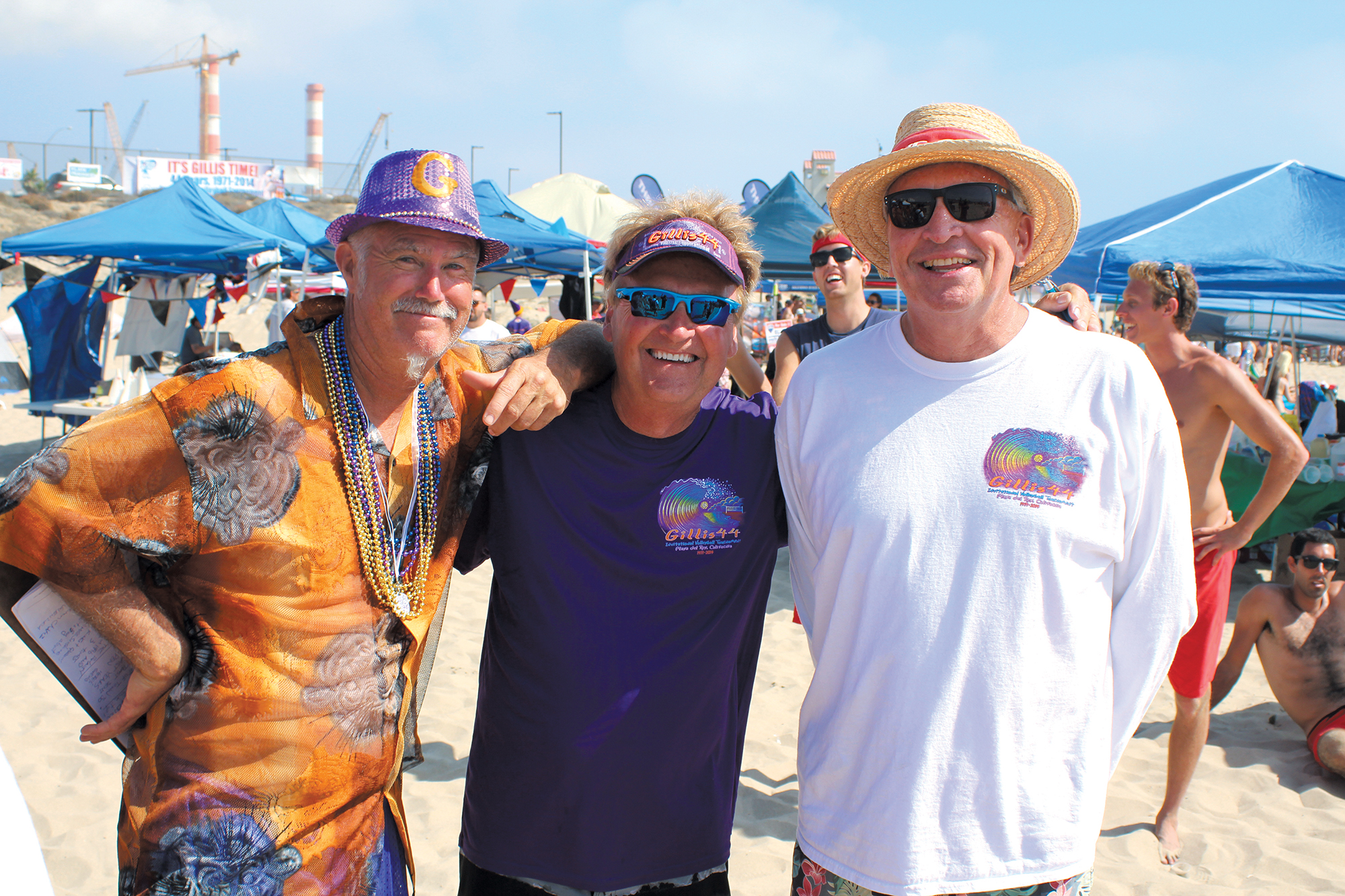 An impressive view of the planes flying in and out of LAX and the calm waves of Playa del Rey’s Gillis Beach made it the perfect spot for locals to spend their weekends and summers. In the early 1970s, the beach was the popular hangout for students from Westchester and St. Bernard high schools who would spend hours body surfing, sunbathing and making new friends. The beach’s single volleyball court served as the location that the teenagers could take out some of their friendly high school rivalry and practice their serves, digs and spikes.

After spending countless weekends honing their volleyball skills on that single court, local brothers Steve and Dave Cressman decided to take the  friendly games to the next level  by organizing an official tournament, which would allow athletes from the two local high schools to compete head to head. Since Steve’s school, St. Bernard, and Dave’s school, Westchester High, rarely ever competed against one another in athletics, they though the tournament would be the perfect opportunity to bring the neighboring schools together. They called the tournament the Gillis Invitational, and the brothers could never have dreamed that the event would continue to transform and grow over the years into a neighborhood phenomenon that is celebrating its 45th anniversary this August.

“45 years is another milestone which few tournaments will ever match and we don’t see an end in sight,” co-founder Dave Cressman says of the event.

As the popularity of the Gillis grew and more spectators visited the beach to watch the games, more than just local high school students wanted to participate in the competition. The Cressman brothers and some of their teammates took the initiative to create new courts to play on to accommodate the need. With more courts they were able to create additional brackets, so that players of all ages and levels of expertise could join in on the games.

“Our philosophy has always been that we want everyone playing instead of watching,” says Dave Cressman of the event.

The first additional bracket was named after long-time player, Paul Hoffman, and dubbed “The Hoffy,” for novice volleyball players who wanted to compete once a year and enjoy a game with old friends.

Today, some of the brackets include “Legends” for older players, “The Open” for the most experienced players and the “Hoffy Plus.” There are also brackets for children, teens, father-son, father-daughter and more.

One of the most celebrated aspects of the tournament began to emerge at the second annual Gillis, when players came to the tournament with hand-sewn swimming trunks. The crowd and participants enjoyed the creativity so much, a contest for who sported the best homemade trunks was born. Friendly competition between neighboring schools expanded to competition among hometown neighbors, making the battle for originality between the players just as important as playing the game.

Over the years, new traditions would emerge. Motivation for players was boosted by adding a Gillis “King and Queen,” bestowed upon those who showed the most spirit and enthusiasm for the sport, as well as the most dedication to making the competition something that everyone wanted to return to year after year.

By 1980, Gillis Beach was equipped with 10 new courts that allowed everyone who wanted to participate in  the two-day, all-day long extravaganza the opportunity to actively participate in the game. Eventually, however, a change to Gillis Beach’s terrain would force organizers to seek a new location for the tournament after loads of sand that were dug up in the Marina were deposited on the beach causing all courts built since the tournament’s onset to be demolished. The tournament was then relocated a mile north to Playa del Rey’s Toes Beach, but the move did not deter the spirit and passion for those involved in the tournament. If anything, it allowed the close-knit group of players and spectators to move forward with one another, building new traditions along the way.

At the 10th annual Gillis, the homemade trunks contest was taken to the next level when players Pat Turley and Dik Johnson showed up to the tournament as comedy duo Laurel and Hardy in a classic Cadillac, prepared with a skit to perform. The crowds were so impressed and entertained by their innovative approach that they began to follow suit and dress up in their own costumes every year. Skits were created to match the costumes and eventually participants would build custom camps to compliment their theme.

Today, costumes are such a crucial part of the event that a participant not wearing one will automatically lose 5 points for their team before the game even begins. The best costume on the first day of the competition automatically advances to the next day’s game, “a great incentive for the weaker teams,” Dave Cressman says.

Another unique aspect of the tournament is the “toast.” It started in 1981, when players Scott Arbanis and Vytas Karilius wrote a poem and brought a bag of toast to the beach. The two grilled their fellow players while simultaneously pelting them with bread. Now, the champions of the previous year get to open the tournament with the same ritual.

“The toast became half the reason you wanted to win,” says long-time yearly participant Denny Smith. “Your legacy was tied to how clever you were and how funny the toast was. It was like creating an SNL skit, but on a local level.”

The local aspect of the Gillis is something that has made it so special to the community of Playa del Rey over the years. By 2005, the city forced the tournament to make its second move to Dockweiler Beach, where it is still held today. Regardless of the multitude of changes the tournament has experienced over what is almost five decades, the traditions created at the games have passed down to the generations of families that have been born and raised in the area.

“The early players have started getting married and having kids and they all still come,” says Dave Cressman.“We have over 200 kids and teens play each year and countless adults that have been to every Gillis since their birth.”

“I’ve been going to The Gillis since I was a baby,” says Playa del Rey native Nina Benton. “It’s been great going through the years and watching it change and grow as I’ve gotten older. It’s a lot more than a beach volleyball tournament. It’s a whole community having a blast and hanging out together.”

To maintain the special locals-only feel of the tournament, the Cressman brothers have been very careful in their public exposure of the event.

“We have resisted advertising and expanding it to become enormous and unmanageable and it is truly an invitational tournament with a maximum amount of players to keep its personality and character intact,” says Dave Cressman.

In 2012, the Los Angeles City Council dedicated a day to the event called “Day of the Gillis,” due to the huge significance the event has in the community.

“It was a true honor for Steve and I and was instigated by Patrick Brown and ‘The Jackass Posse’ who attend every year without fail,” says Dave Cressman.

Starting preparations for the event in April, the Cressman brothers put in immense effort to maintain the quality and liveliness of the competition. Every year the tournament has a new color theme and logo design, which participants proudly sport around the community on t-shirts and visors. The founders don’t work completely alone, however. They receive a lot of support from local businesses, many which benefit from the bustling crowds that swarm Playa del Rey during the tournament.

Playa del Rey’s The Shack has supported the Gillis for over 40 years and the location is full of hungry beach-goers looking for a bite to eat, drink and relax after an extensive twelve-hour day at the beach during the tournament weekend.

“We love The Gillis,” says The Shack owner Philip Gearhart. “Everyone has friends and knows teams playing in the tournament. We get a great, fun crowd during the tournament every year.”

What began as simply one court and two local high schools wanting to compete against each other, has now transformed into an all-day beach party with 800 players. It has become not only a community gathering, but in a sense, a family reunion, where locals share memories, traditions, wins and defeats, and most importantly, a bond that has been unbreakable for decades.

“This is the 45th annual tournament and milestones are important. Going five more years to fifty is the goal and then we’ll see after that,” Dave Cressman says. “We are very proud of The Gillis and its traditions and family members. I guess you could say it’s our legacy to the community.”