In your hometown with… the De La Rosas 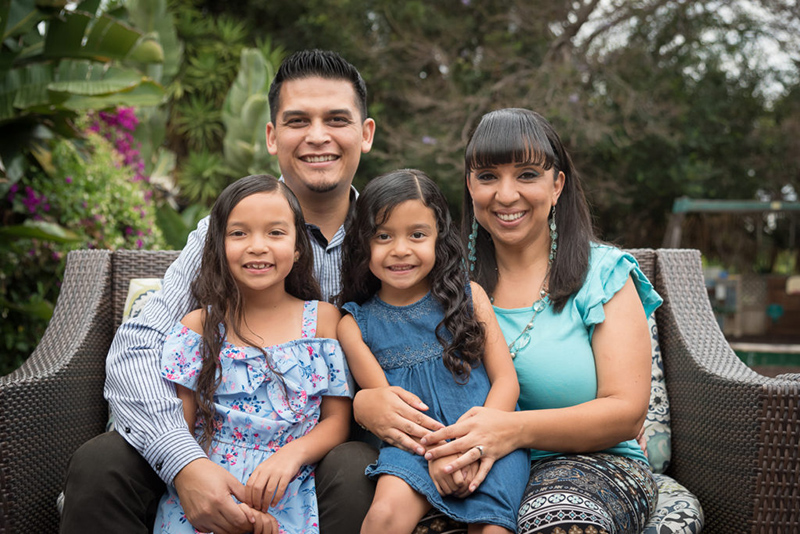 On the surface, Mary and Stephen De La Rosa don’t appear to be that similar. They have different backgrounds and were raised in different Christian faiths. But where it matters most, the high school sweethearts agree completely. They are working together to make the world a better place through education, starting with their family and jobs.

They both grew up locally and their families are still in the area; hers in Westchester and his in Marina del Rey. They met at Venice High School in Spanish class.

“He was a junior and I was a sophomore and the teacher sat him next to me,” Mary said. “I thank his mom for not teaching him Spanish at home, because if she did, then we never would have met!”

They’ve been married for 12 years and purchased their home in Westchester right after they got married. They are raising their two daughters to be assertive, confident, kind, spiritual and respectful. Bella is 7 and in the third grade, while Amelia is 4 and in TK.

They both swim, take gymnastics classes and karate.

Stephen added, “If they have a disagreement with a friend at school, we’ll try to equip them with the right words to say because sometimes they’ve got feelings they can’t identify. It’s so gratifying to see Bella put these tools into action and it leads to a resolution of the situation. We try to empower them with their words and their choices. We also let them know that their words have consequences. Their words have power.”

Stephen loves numbers and works as a CPA with ExEd, a nonprofit that provides outsourced CFO services to charter schools. One of the clients he personally works with is WISH Charter.

“To be a part of that is huge. It’s rewarding to visit the schools and see the dollars in action. It makes me wonder why we don’t invest more in our students,” he said. “I’ve always loved working with nonprofits because it’s not always about the bottom line with them. I found something special here where I could leverage my numbers love and analytical skills and help out an industry that needs it. The way I see it is that I take care of the numbers, so the educators can do what they do best.”

He admits that Mary was a huge influence on him. Mary always knew she wanted to be a teacher, in fact, she has it in writing on her kindergarten statement. She has a bachelor’s degree from California State University, Northridge in child and adolescent development, with an emphasis in early childhood education. The same emphasis was included in her master’s degree from CSUN in educational psychology. With almost 20 years of experience in her field, Mary is now director of her own school, Creative Explorers Toddler and Preschool Program.

“I used to work as the director of a preschool in Santa Monica, and they are light years ahead of us locally in this field. I wanted to open a school and run it my way and bring something special to Westchester,” Mary said.

One of the ways her preschool is different is that they believe in supporting the family as a whole.

“It’s not just what the children are learning here, but what’s happening at home. What do they need?” she said. “A lot of our families aren’t from L.A. originally, so they aren’t lucky enough to have the extended family we have. So we become the aunts, the grandmas, etc.”

Mary and Stephen noted that marriages with children up to five are more at risk for divorce, so the support is essential.

On weekends, the De La Rosas continue this work by volunteering with the marriage counseling ministry at their church, Oasis, with a focus on families with younger children.

“After we got married, we wanted to find a church that worked for both of us, since we were raised in different faiths,” Mary said.

“And that we’re comfortable practicing together. We know how important that is in a marriage relationship,” Stephen added. “The selfish incentive for helping with marriage counseling is that it keeps us accountable in our own marriage. I like that part.”

Besides recognizing the importance of education and spirituality, the De La Rosas are big on breaking stereotypes.

“It’s OK for the woman to have a demanding job. It’s OK for dads to drop off and pick up the kids on a regular basis. It’s OK for the husband to do the dishes,” Stephen said. “I cannot stand when dads say ‘I’m babysitting my kids.’ They’re your children! It’s not borrowed time that you’re donating to them.”

Mary adds, “I’m huge with ‘women can do anything’. Being a girl doesn’t have to hold you back from anything. Being a girl is just what you’re labeled with.”