In your hometown with…the Farmer Family 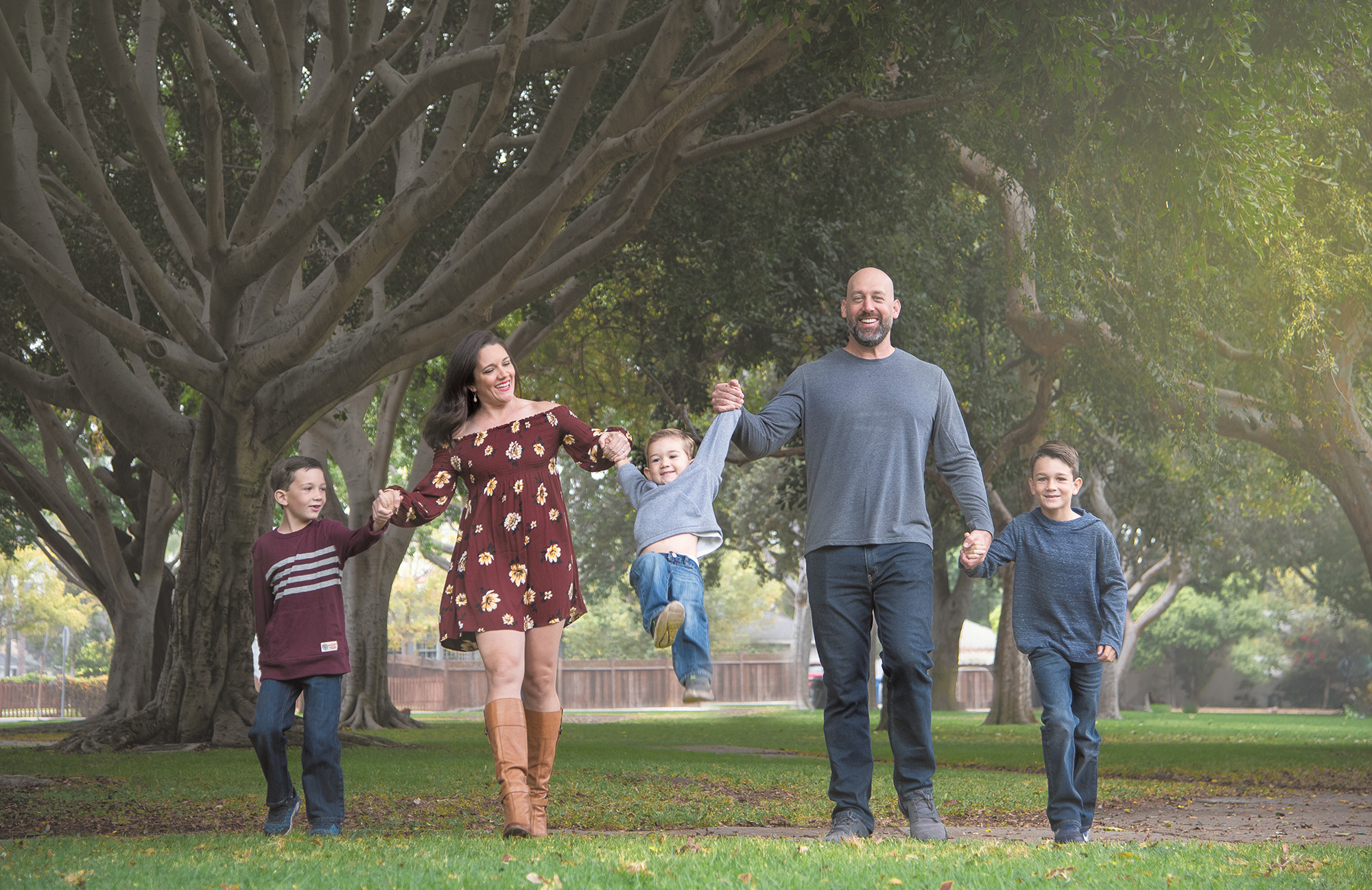 The Farmers knew they wanted to live in Westchester since they were students at Loyola Marymount University.

“I knew this was a neighborhood that was turning over. There were a lot of long-time residents that were selling, and I knew it was going to be the place for young families,” Tim said. “This was before we even started thinking about having kids, in 2003.”

So the Farmers started looking for a fixer-upper that they could make their own.

“I actually found my sister her house first. She lives near us in Westport Heights,” Tim said. “When I saw that house, I told my family that if I don’t buy it, someone in the family should. It was perfect for her.”

Tim and Vickie met when he was a senior studying business and she was a freshman with a political science major. Vickie had grown up in Palmdale and in order to pay for college, she worked at three jobs. One of those was doing stats for various matches for the athletic department. Being an athlete herself, this was a perfect job for her and she eventually became aware of Tim, who was on the volleyball team.

“I had such a crush on him and he was a senior, so I thought he’d never notice me,” she remembered. “We chatted at a party and after that I called my sister and said, ‘I just met the guy I’m going to marry!’”

Adds Tim, “I just thought I was talking to a cute girl on a couch. But I must have made a good impression!”

Together since 1999, they got married in 2007 and finally found their dream house in 2008. Then they set out to make it theirs with a three-phase remodeling plan. It was easy to fall in love with their neighborhood and knew it would be a great place to raise kids.

“There are 14 kids, 8 and under, on our block. Our kids have built-in buddies. I’m a twin, and we grew up on a street with five boys who played together every day. I wanted the same for our kids,” Tim said.

The couple have three children: Henry, 8 and in second grade at St. Anastasia; Thaxton, 6, in kindergarten at St. A’s; and Andrew, 3, commonly referred to as Drew, who is going to preschool at Children of our Savior. The kids play soccer, basketball and baseball. Henry also tried flag football this past summer.

“Even though we’re a sports family, my kids don’t have to be the fastest or most athletic. The biggest compliment you can say is that we have good kids. And they are. They all have good hearts,” Vickie said.

Tim coaches all his sons’ teams when he isn’t working at AT&T in El Segundo as Associate Director of Operations. In fact, most kids in Westchester know him as “Coach Tim.”

“I look at it as a way to spend more time with my kids and also have a positive influence on other kids,” Tim said. “I try to be positive and try to make sure they have fun while knowing how to stay within the boundaries of what they are supposed to be doing. I developed my coaching style based on the experience I had as an athlete–what worked and what didn’t work. You can definitely hear me on the sidelines, but it’s either positive or instructional. I’ve never said a bad thing to a kid. At that age it can scar them forever.”

“I was coaching Henry’s baseball team, the Miami Hurricanes, and we promised him a pet lizard if he could hit a fly on the dirt. He was 5-years-old,” Tim said.

Vickie added, “He finally hit one, and as he was running to first base he yelled out, ‘I got a lizard! Mom, is that a lizard ball?’”

Fly balls are now known as “lizard balls” in the Farmer household.

Busier now with her kids’ activities and community involvement, than when she was doing marketing and licensing for Activision, Vickie loves her role as a mom.

“It was the kind of job where you had to be there 24-hours a day. After having children, I realized I didn’t want to sacrifice my family for my job. The most important thing in the world to me is my family,” she said.

She now works part-time at the YMCA, teaching a parent-child tumbling class for toddlers.

“It’s a safe place for kids to be kids and not be told that, ‘No you can’t jump on that, you can’t run there, you can’t throw that.’”

She is currently on the board for Del Rey American Little League (DRALL) in charge of fundraising, coaches eighth grade girls volleyball and is on the PTO at St. A’s, where she has co-chaired the school’s Parish Ball fundraising event for two years in a row.

Vickie excels at her fundraising efforts and is always looking for better ways to combine that with fun.

“We love to host, and we’re usually the first to throw a party. We’ve had a pumpkin-carving party, cornhole parties and adult Olympics,” she said. “I wouldn’t do it if I didn’t love it. I truly love planning events and making sure everyone has a good time. Our biggest challenge is to not make fundraising an obligation, but an excuse to have fun. And if we raise a lot of money at the same time, then it’s a win-win for everybody.”

Tim adds, “I honestly think that Vickie and I are at our best when we’re entertaining. We actually get better as a couple and a team. We know what we’re supposed to do.”

The Farmers also make spending time with extended family a priority and are lucky that a lot of them live close enough to make regular Sunday family dinners a reality.

“It’s kind of sacred. It’s important to make time for family,” Vickie says. “We have an open-door policy here. Our front door is open to anybody who needs to come by, anytime.”

And when it comes to Westchester, there’s no place the Farmers would rather call home.

“The neighbors, the community–there’s no comparison to anything else on the Westside,” Vickie said. “If you go for a walk down the street, you’re sure to see someone you know. It’s such a great community and it’s amazing how involved everyone is.”