In your hometown with…the Vasquez Family 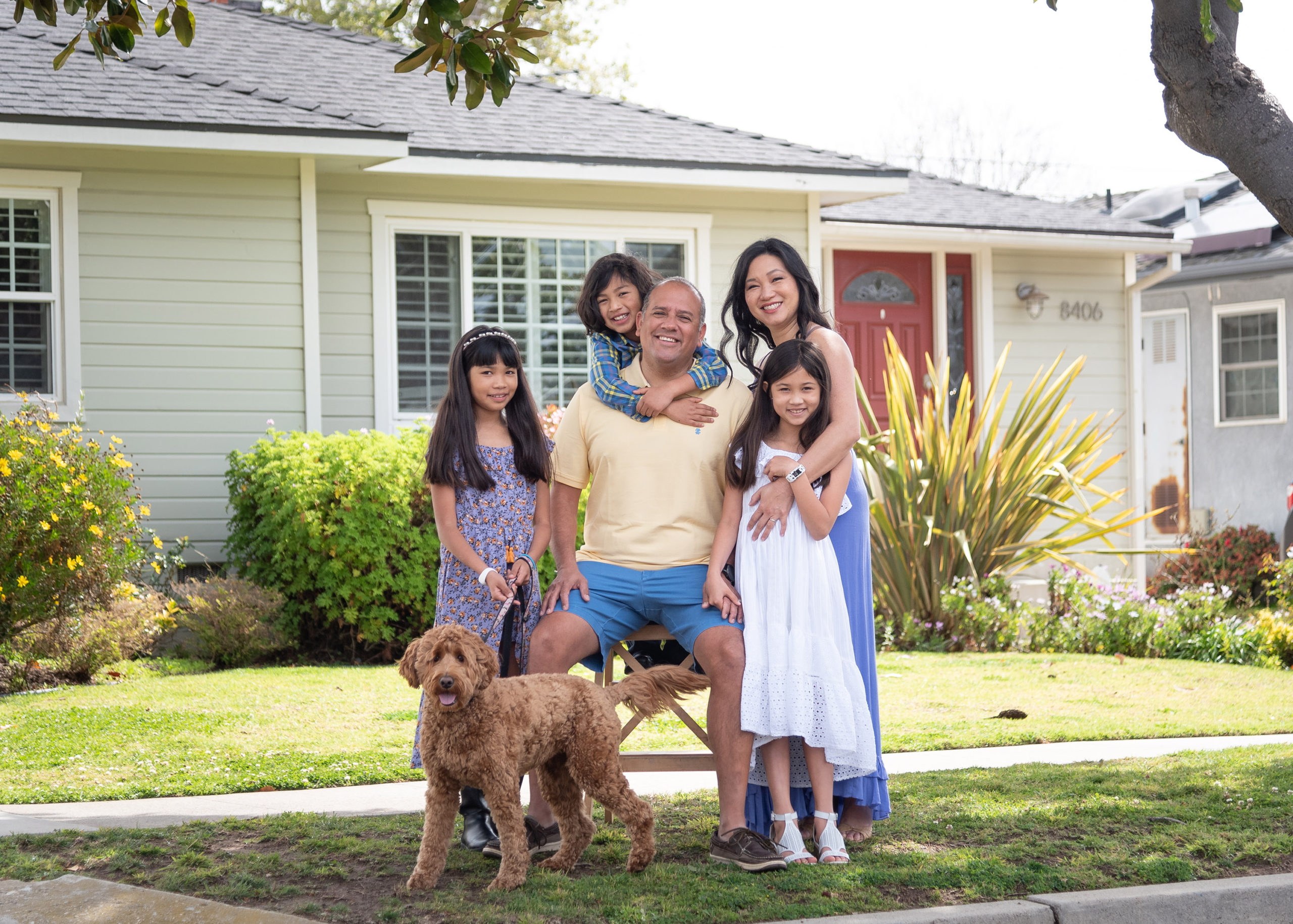 If you want to meet the Vasquez family, you will have to catch them first! This is a family that is always on the go, with sports, careers, volunteering, school, Girl Scouts, community activism and entrepreneurship! It would be an understatement to say that this busy family of five is quite an active bunch.

Rosalyn and Oliver Vasquez live in Westchester with their three children, Olivia and Sophia who are 9-year-old twins and Asher who is 7-years-old. A 2-year-old Labradoodle, Penelope and 15-year-old pup, Nuen, who was rescued after the tsunami in Thailand in 2004, complete the family.

Rosalyn was born in Vancouver but made the move to Southern California when she was in first grade. She grew up in Diamond Bar and considers herself a California local. After graduating from Southwestern University School of Law, she was looking for a new neighborhood when she heard about a wonderful, still affordable beach town called Playa del Rey.

She quickly fell in love with the area and moved into a condo so she could enjoy the beach life.
Oliver grew up in Northridge and is the first-generation son of a Guatemalan father and a Polish mother who met in night school while learning English. After attending California State University Northridge for his undergrad, Oliver headed to Southwestern University School of Law where he met Rosalyn on their moot court team. While traveling around the country competing in tournaments, their romance was born!

They soon got married and moved into the condo in Playa del Rey and had their twin girls. When Rosalyn became pregnant with Asher, they knew that they needed more space and moved into a home in Westchester. Their first Westchester residence proved to not be the right fit, so they rented in Playa Vista until they found their dream home in Kentwood.
“We love our neighborhood and our neighbors,” said Rosalyn. “We don’t ever want to move!”
This love of their community is a theme that runs through all that the Vasquez family does for 90045 and beyond.

Both Rosalyn and Oliver are practicing attorneys. Rosalyn specializes in employment and business law, but she is also working on a start-up called “The Attorney List.” This new website will give people access to lawyers’ services virtually and will specialize in lawyers who speak multiple languages.

“Minority communities have the legal barrier of cost as well as the ability to understand,” said Rosalyn. “We want to make legal services available at a flat rate so that people know exactly what it will cost them and then they can speak to someone who understands them face-to-face via Zoom or video chat.”

Rosalyn is very close to her Thai heritage and currently serves as the president of the Thai American Chamber of Commerce of California, a business organization that advocates for the interest of its members and the Thai business community in the state. She also is the President of the Thai New Year (Songkran) planning committee. This festival attracts 30,000 to 40,000 people annually to six blocks of Hollywood Blvd. in Thai Town to celebrate. Unfortunately, this year’s event has been postponed due to COVID, but Rosalyn is looking forward to working on the celebration once gatherings are allowed again. Another important part of honoring her heritage is speaking out to put a stop to the Asian American Pacific Islander (AAPI) hate crimes that have increased over the last year. She recently attended a rally with the LAPD and other leaders from the AAPI community to encourage the reporting of hate crimes to the authorities.

Oliver is an insurance defense attorney and is the senior trial attorney for Hartford Insurance. He also teaches at Pacific Coast Law School and is a moot court adviser at Southwestern Law School. When he is not on the job, he loves coaching the kids in AYSO, Westchester Little League and Westchester Del Rey Little League, where he serves on the board of directors.

“Through sports in the community, we feel like we have gotten to know everyone in our neighborhood,” said Oliver. “I have built bonds of friendship and solid relationships through being involved in Little League and AYSO.”

Pre-COVID, another one of Oliver’s favorite pastimes was taking the kids to community events at local schools and places like the Elks Lodge.

The Vasquez children participate in so many activities, it is hard to keep track of them all! The independent and determined Olivia, and the shy but silly Sophia both play soccer and softball. Some of their other top activities are horseback riding, art classes, riding bikes and music lessons. The charismatic Asher plays baseball and soccer. He also likes playing guitar and making art.

When it comes to hobbies the whole family enjoys, they all light up at the mention of skiing and snowboarding. If the conditions are right, chances are they’ll be heading to June Mountain in Mammoth for a weekend of playing in the snow.

Olivia and Sophia are fourth-graders and Asher is a first-grader at Citizens of the World in Mar Vista, where Rosalyn is also a room parent. The kids are looking forward to returning to in-person school in three weeks.

“Online school has been OK, but it is just hard to focus at home,” explains Olivia.
Sophia can’t wait to be with her friends again.

Girl Scouts is another important part of the Vasquez family’s life. Rosalyn is the co-leader for Olivia and Sophia’s troop, which is specifically for twins. This troop was born out of Rosalyn’s involvement with the group West LA Parents of Multiples.

The girls are currently working on their Girl Scout cookie sales and have found it to be a challenge this year due to COVID restrictions. To help them reach their sales goals, Oliver has built a lemonade-type stand with a plexiglass barrier so they can sell Thin Mints and other cookies in front of their home to their neighbors, with whom they have great relationships.

“I love our ‘neighbor garden’ which is a garden we planted between our house and our neighbor’s house,” said Olivia. “Our neighbor built the garden boxes, and we all planted fruits and vegetables. The whole family takes care of the garden, and yesterday we picked strawberries!”

This tight-knit feel that is all over Westchester makes it a special place to live, says Rosalyn.

“I can walk around and see people that I know; it has a small community feel within a big city,” said Rosalyn. “I am also involved in moms’ groups online and everyone is so supportive of each other even though we may not have met in person. It is nice to know that you have a group that has your back, and they are always pro-active in doing positive things for the community.”