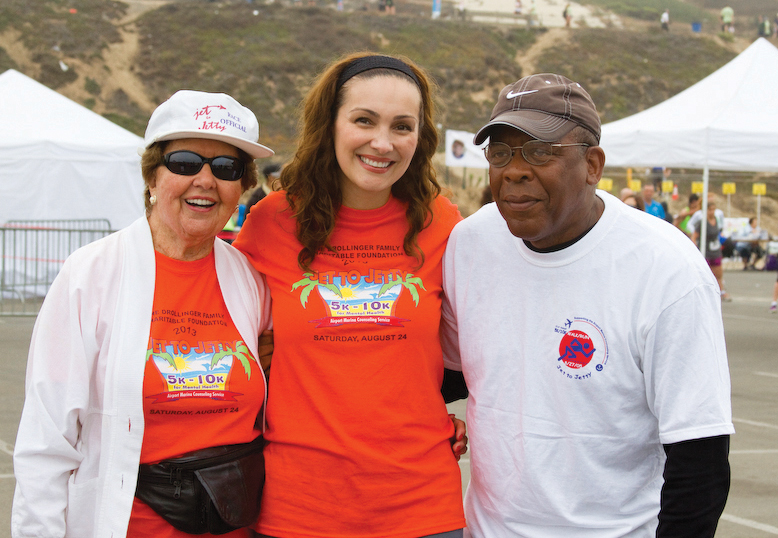 This year the annual Jet to Jetty Race for Mental Health will celebrate 30 years of raising money for the Airport Marina Counseling Service (AMCS) and organizers are looking for the support of the community to make this their largest race yet.

While the race is celebrating its thirtieth year, AMCS has been around for more than fifty years in Westchester. The idea to open up a mental health center was the brainchild of long-time Westchester resident Mary Ellen Cassman, who is being honored this year as the race’s Grand Marshal. Cassman become inspired to bring mental health services to the area after giving a young woman a ride home to Westchester from a conference. The young woman was troubled and in need of help, but didn’t know where she could go to seek counseling. Cassman, along with her husband Alan, who passed away last year, and other members of the Westchester Coordinating Council came together to found the pioneering AMCS in 1961. The clinic opened for counseling the following year. While today there is still a stigma around mental illness and seeking counseling, something that AMCS has fought hard to change over the years, in the 50s and 60s seeking help was severely frowned upon and according to Cassman “was only about being a crazy person.”

When the clinic opened, Cassman recalls that there was a large group of community members who were completely against having a counseling center in their neighborhood.

“People were really frightened,” said Cassman. “Our house was watched and people were keeping tabs on me ‘the champion of the crazies.’”

Cassman was even accused of being a communist. The naysayers eventually started to come around, however, and began to accept the clinic after their fears of a spike in crime and the criminally insane wondering the streets never manifested. Despite the controversy of those early days, the clinic persevered and continued to grow its services with the help of dedicated staff and volunteers.

Today AMCS is open seven days a week and serves more than 1,200 people a year. It also acts as a training facility for mental health professionals. At AMCS no one is turned away for economic reasons. The ability to pay system was an early hallmark of AMCS and continues to remain an important part of the clinic’s mission.

“Everyone deserves quality mental health services regardless of socio-economics,” says Eden Garcia-Balis AMCS’ Executive Director. “That’s what we provide here. The person who pays fifteen dollars and the person who pays ninety gets the same services.”

While the clinic helps clients that are dealing with mental health issues like depression and post-traumatic stress disorder, in addition to one-on-one counseling, AMCS offers group classes and workshops with topics on parenting, relationships and learning how to deal with stress. Thanks to the Hannon Foundation’s Immediate Intervention Program, people looking for immediate help with a crisis can be seen expeditiously.

“People come to AMCS for a variety of reasons including anxiety, depression and even self-awareness,” said Garcia-Balis. “Talking to another human being, specifically a trained mental health professional can be very powerful and can really help.”

For the last few years, the clinic has been championing bringing mental health services to local schools. With the help of grants, AMCS is now at three neighborhood schools three to four days a week and according to Garcia-Balis the counselor’s schedules are “filled very quickly.”

The non-profit, which is funded through grants and patient fees, relies on its two big yearly fundraisers—its Spring Gala and the Jet to Jetty race—to help fill any funding gaps. AMCS also depends on the financial support of its auxiliary non-profit, the Westchester Mental Health Guild, which was founded in 1962 to raise money for the organization. The group runs the volunteer-led Guilded Cage Gift Shop and holds the annual local garden and home tours.

While for the last few years the numbers of runners for the Jet to Jetty has hovered at 800, event chair Dan Cohen is hopeful that this year they can reach their goal of having more than 1,000 runners participate. Jet to Jetty organizers have been encouraging community groups to get involved and create teams with fun themes.

“I’ve saved all my Jet to Jetty t-shirts and I now realized that I’ve run almost every one of them over the last 30 years. Running alongside the Playa del Rey beach makes it my favorite race of the year—a flat, fast course with the ocean air in your face,” said Cohen. “This year we’re encouraging teams and people to get creative with themes and costumes. You don’t have to be a runner to participate, just someone interested in having fun and supporting the community non-profit mental health clinic.”

Garcia-Balis is confident that this year’s race will be one of the most successful to date thanks to the outpouring of support from the community. The event already has almost 100 volunteers ready to assist on race day.

“Community clinics like AMCS are vital as they provide much needed support to families that would otherwise have little or no access to mental health services,” said Garcia-Balis. “The Westchester community understands the importance of the services we offer, as evidenced by their support and participation in our fundraisers like the Jet to Jetty.”

Before and after the race, attendees can enjoy the expo  featuring vendors offering healthy food and drinks. This year the event is also working on being more family-friendly and will have food trucks, face painting and music.

Pictured: Mary Ellen Cassman (left) will be this year’s Jet to Jetty Grand Marshal.  Here she is pictured at last year’s event with Garcia-Balis and Jet to Jetty volunteer Raymond Eason.