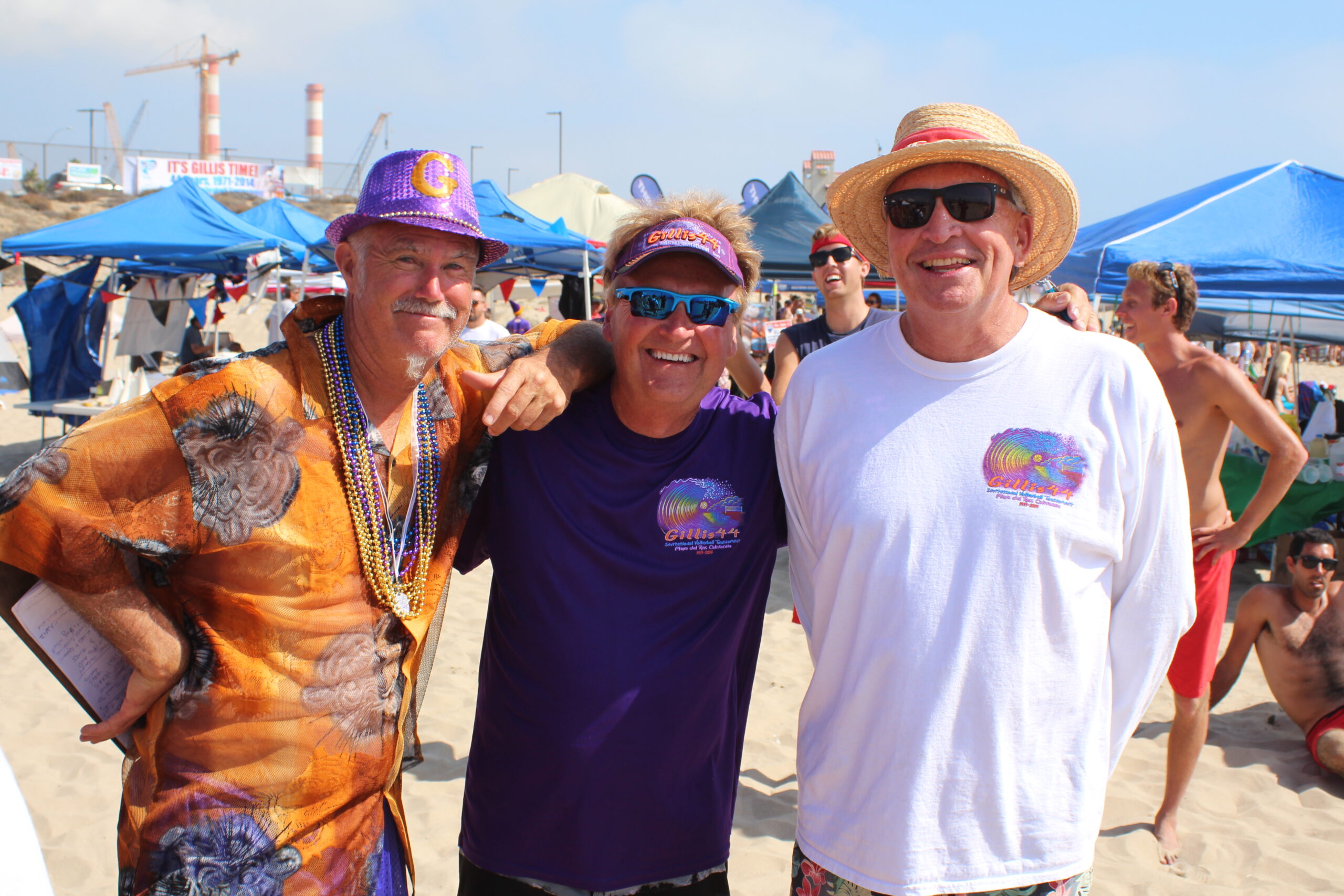 The (sort of) golden anniversary of The Gillis Invitational Volleyball Tournament marks the end of an era. The tournament and beach party July 23-24 at Toes Beach in Playa del Rey will be the 50th, and final, Gillis. Brothers Dave and Steve Cressman, who co-founded the beloved hallmark of California beach culture in 1971, are retiring the event.

“It was just time,” said Dave Cressman. “It’s a lot of work. My brother and I are a bit older. We thought the 50th year would be a good time to say goodbye.”

Except that the 50th year landed smack in the middle of a global pandemic, so the swan song for The Gillis, as the tournament is affectionately known, had to be postponed until this year.

Tim Bradford, of Hawthorne, said he’s “very bummed” to see The Gillis go. He played in the tournament for 37 years until he was too old to compete anymore. Then he switched to running the boards, which he did for the last 10 years.

The event’s legacy is that “huge volumes of people are into volleyball now who otherwise would never have gotten into the sport,” Bradford said.

The Gillis even produced a few stars. USA Volleyball’s Tim Hovland, a California Beach Volleyball Association Hall of Famer, is among those who got their start at the tournament. Yet The Gillis intentionally was not restricted to elite athletes. It was designed to be fun and inclusive, welcoming all levels of play from beginners to AAA/Open.

Over the course of 49 years, The Gillis drew an estimated 25,000 players, some from two or three generations of the same families. In 2019—the last time The Gillis was played—there were about 600 players from 120 teams.

The Gillis’ origin story is that Steve Cressman, then 18-years-old and with a crush, wanted to organize a friendly competition to dazzle his high school sweetheart.

“I didn’t impress her, and she ended up marrying one of my friends from high school,” he quipped.

Seventeen teams competed the first year. All were from St. Bernard and Westchester High School wearing handmade matching team trunks, a tradition that eventually morphed into spectators and players donning extravagant costumes and performing side shows of skits and dance routines.

The showmanship of Pat Turley and Dik Johnson, in particular, is the stuff of legend. In 1980, they drove up in a 1932 Cadillac dressed in Laurel and Hardy costumes that they ripped off to reveal old-fashioned one-piece swimsuits underneath. Another year, the pair arrived on horseback dressed as the Lone Ranger and Tonto. But the pièce de resistance was when they showed up in LAPD uniforms driving a rented police cruiser. They pretended to “bust” the tournament, then pulled a tarp off a “jail” to uncover a live band that played “Jailhouse Rock.”

For Westchester resident Carla Brown, dressing up for The Gillis every year is a cherished family tradition that has spanned two decades.

“It was bigger than Christmas,” she said. “It runs deep. Really, really deep. If someone has the audacity to plan a wedding around that time of year, we are like, ‘How could you?’”

Adult children in Brown’s blended family fly in from other cities every year to participate, and their annual costume theme is a closely guarded secret until the tournament debut. Highlights have included dressing up as Star Wars and Brady Bunch characters and transforming into Barbie and Ken dolls in life-sized Barbie boxes.

“It’s so much fun,” Brown said. “The actual volleyball is almost secondary.”

What the tournament has never had, however, is food trucks, a conscious effort to encourage the patronizing of local bars and restaurants.

“The whole town is busy with it every year,” said Mo Krant owner of the Playa del Rey’s Mo’s Place and a longtime sponsor of The Gillis. “People who don’t even live here anymore come back for it.”

Stephen Mayer, who owns the Prince O’ Whales on Culver Blvd. said The Gillis is more than just a boon for business.

“It’s part of the culture,” he said. “It’s like a tree that’s always growing. It sheds its leaves in the winter, but it always comes back in the summer.”

In 2019, the Neighborhood Council of Westchester/Playa honored the Cressman brothers by naming them Stars of the Neighborhood, an annual award that recognizes people who quietly give back to the community.

In 2012, the city of Los Angeles officially designated August 10 “Day of The Gillis.”

The event didn’t always have the warmest of welcomes, however. Over the years, The Gillis relocated several times, first after Gillis Beach succumbed to the expansion of LAX. For a bit, the tournament had to move to Dockweiler Beach after local leaders said it had become too big and was causing traffic and parking woes. The Cressman brothers negotiated a return to their original location after promising to downsize.

Dave said he won’t miss the massive amount of work that goes into organizing The Gillis every year, but he’s proud of what he and his brother created.

“The amazing friendships made for life over these past five decades, in a fantastic community and by the beautiful Pacific Ocean is beyond special,” said Dave. “Seeing multiple generations of families and friends spending this weekend together and sharing memories year after year makes The Gillis different from any other tradition.”

Dave, who now lives in Highlands Ranch, Colo., said he’s heard residents say wistfully that it would be nice if someone took over and kept The Gillis going, but he’d rather the tournament go out on top.

“I don’t want anybody messing up the legacy of The Gillis,” he said.

Krant, of Mo’s Place, is resigned to The Gillis ending.

“It’s always sad to see something this special come to an end,” he said. “But that’s everything in life. Everything has its time. We all just have to be happy for the memories.”

Check out more info on the event at www.thegillis.com.

Thanks for the memories!

By Courtenay Edelhart. Photos courtesy The Gillis and Denny Smith.