Traveling back in time through Westchester/Playa: 1940s 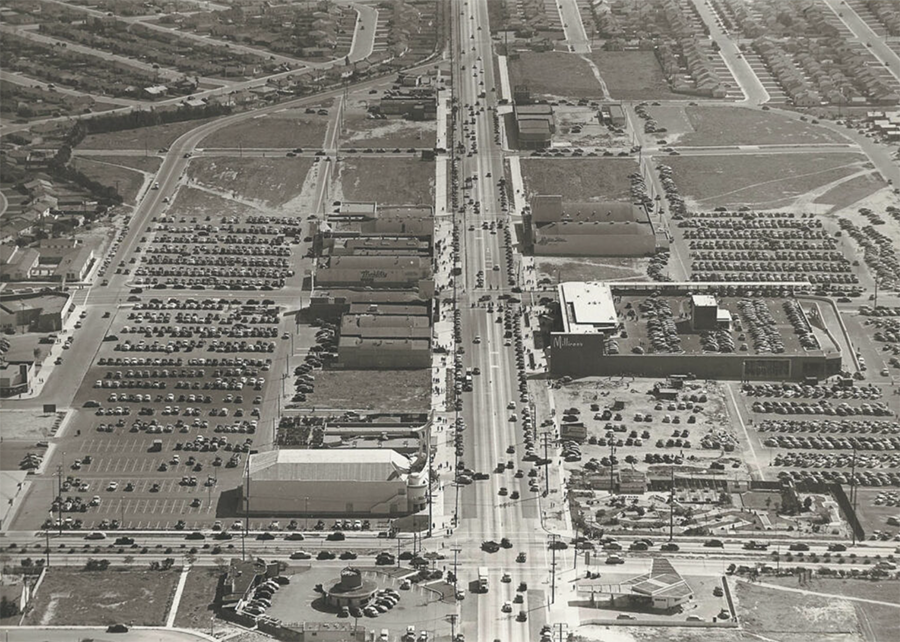 For the regular passengers in our time-travel machine, which has taken us all the way back to 65,000 BCE and forward from there up to the 1930s in our last travels exploring the Westchester/Playa geographic footprint, we are jumping back on board. Our time-travel machine is stopping in 1942, where we see women who have been pole-vaulted into what had been a predominantly male workforce due to the December 7, 1941 attack on Pearl Harbor. These women are stepping up to fill the jobs that have been left behind by the men who have enlisted in our military to defend and protect our country.

We are traveling back to capture what was happening on December 7, 1941 in our local community. The machine has mistakenly stopped on December 6, 1941. We see Fred Marlow and Fritz Burns supervising the final pouring of foundations for homes they are building near the intersection of La Tijera Boulevard and Manchester Avenue. These homes are being constructed as affordable housing and will only be sold to those working in the defense industry. In anticipation of being pulled into the European Theatre of World War II, workers are rapidly being hired by Northrop, Douglas and Hughes Aircraft Companies, among others.

This day of December 6, 1941, has become identified as the birth of Westchester, ironically just one day before the infamous attack on Pearl Harbor. We see other developers join in the massive explosion of homes being built throughout the 1940s.

We can see that La Tijera Boulevard is a main thoroughfare from mid-Los Angeles for visitors traveling into our area. One such visitor, Ella Drollinger, widow and mother of two sons, can be seen driving into the area to explore the budding neighborhood around Mines Field, which is just a dirt air landing strip surrounded by bean fields. Just 20 years after women received the right to vote, real estate developer Drollinger, which is not the usual vocation for a woman at that time, is deciding whether to take a chance on the community. She decides in favor. Purchasing the real property, she decides to fund the construction of the first commercial buildings in Westchester. As we move forward in time, we witness from the southeast corner of La Tijera and Sepulveda Boulevards, the completion of what is to house the first three stores serving these new homeowners: Thrifty Drug Store, Quigley Department Store and Jim Dandy Supermarket.

Our next stop is October 3, 1946 for the Grand Opening of the Loyola Theatre, as a part of the Fox West Coast Theatre chain. We witness the floodlight focusing on the beautiful swan neck tower, stunningly rising nearly 60-feet above the theatre’s glorious marquee. We now know that in 1982 the theatre was declared a cultural and historic monument and the façade remains an iconic symbol of the history of the local film industry. We travel forward to January 12, 1949,

where we attend another grand opening of the La Tijera Theatre on the southeast side of the intersection of La Tijera Boulevard and Centinela Avenue. We are among a crowd of 1,530 people seated in the auditorium, as beautiful and ornate as the interior of the Loyola Theatre.

Traveling forward just a couple of months, we stop for a daytime grand opening of the $3 million department store Milliron’s, designed by Gruen Associates and located at the northwest corner of La Tijera and Sepulveda Boulevards. We know today it is considered by architectural historians as a prototype for the modern self-contained retail malls. Gruen tells us of the economic advantages of a low sprawling building with parking, an auditorium, a restaurant and retail shops located atop the building. The façade of the building, we note, carefully hides the parked cars atop the building. We also notice the display windows at ground level are angled for the benefit of traffic traveling along Sepulveda.

Our next view from our time-travel machine is looking down from the Westchester bluffs to witness the construction of the hangar in 1943. Here Howard Hughes, who has been contracted by the military to build the Hughes H-4 Hercules, is building a prototype strategic airlift flying boat to transport troops over the Atlantic during WW II. Moving forward a couple of years, we hear the aircraft is commonly and controversially referred to as the Spruce Goose, which is the nickname being used by critics. The war ends before the H-4 Hercules is completed. It is being built entirely from laminated spruce and birch, the largest flying boat ever to be built, with the largest wingspan of any aircraft ever flown. We move ahead to 1947, to Long Beach, where the aircraft has traveled from Jefferson Boulevard across the main thoroughfares of Los Angeles. Hughes is surprising his critics and flies the plane over the Long Beach harbor for approximately one mile, at 70-feet above the water. It will be learned later that, in fact, the H-4 Hercules could have accomplished what it had been designed to do, based on a study conducted by Wrexham Glyndwr University in 2013-14.

Right about this same time, in 1947, we see the formation of the Westchester Woman’s Club, with a mission to fundraise to support community improvement. They have formed almost a decade after the birth of the Woman’s Club of Playa del Rey in 1938.

The Woman’s Club of Playa del Rey is currently sponsoring the “Celebrating Women” exhibit at the Westchester/Playa Historical Society (WPHS) Discovery Center. The club serves the Playa del Rey, Silicon Beach and surrounding communities by enhancing the lives of others through volunteer service and philanthropy. Their determination, conviction and drive to follow the ideal that “sometimes all it takes to change the world is a little support” continues to make an impact on our local region to this day.

The ”Celebrating Women” exhibit features three renowned local artists, JoAnn Cowans, Gail Grover and Mary Leighton Thomson, who have captured the history of our local community in their exquisite works of art. Additionally, the exhibit highlights the contributions of Rowena Ake, Mary Ellen Cassman, Mary Lou Crocket, Ella Drollinger, Ruth Landsford and Shirley Pfeil during the first half of our 101 years. Recognition will also be given to our contemporary pioneers Karen Dial, Christina Davis, Lisa Schwab, Valeria Velasco and Maxine Waters.

Our next exhibit, “Commemorating Veterans,”sponsored by Richard Moon & Associates opens May 29.

The Discovery Center is located in the Westchester Triangle at 6207 W. 87th Street in Westchester.

Cozette is an attorney and lifelong resident of Westchester. She is the President of the Westchester/Playa Historical Society. Together with a group of dedicated volunteers, the organization is working on creating new programming and events to celebrate the history of the area and engage the community in preserving it for future generations.