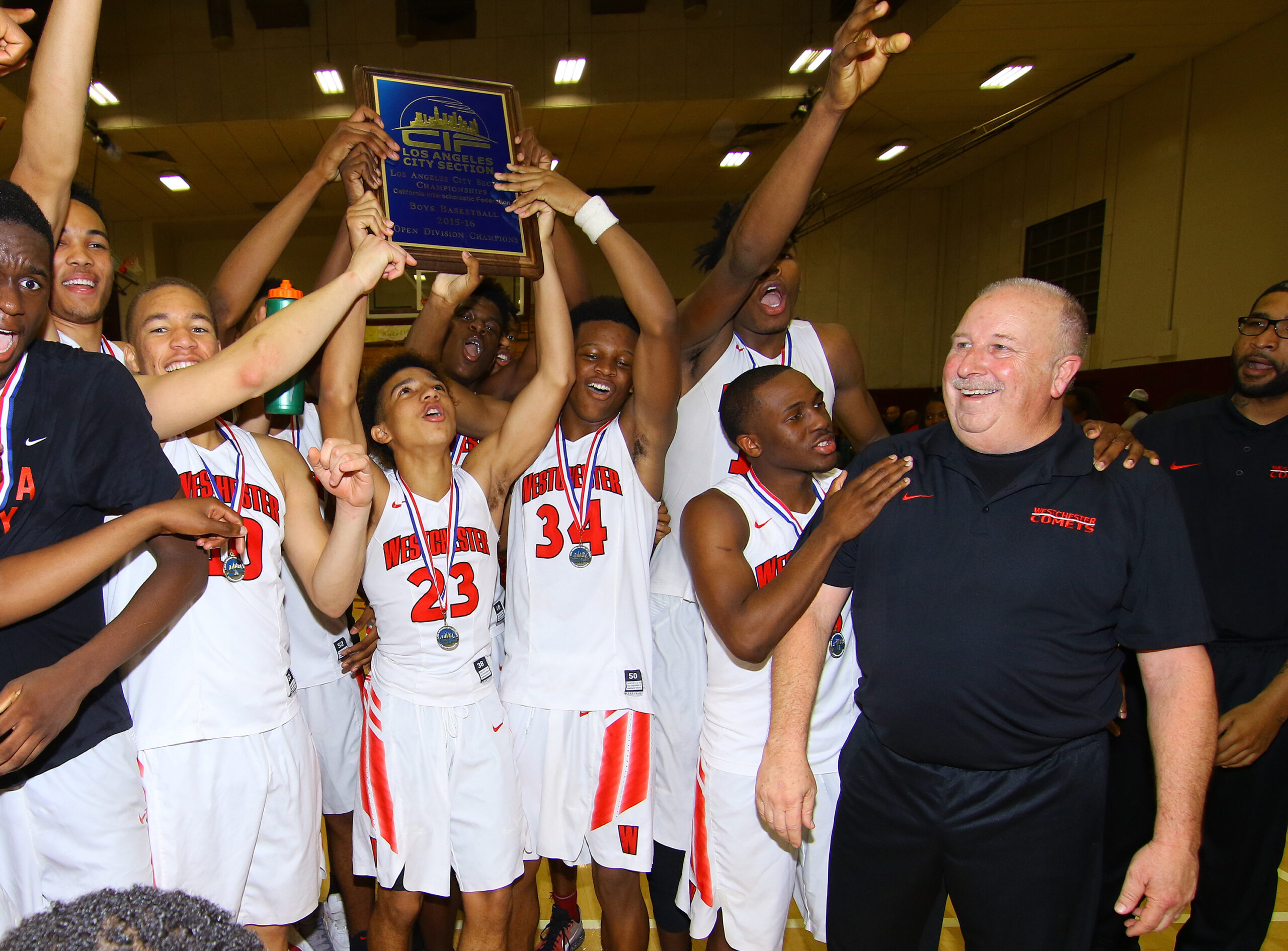 “I wanted to be an assistant coach. I was trying to get out of head coaching my last 10 years, but [Assistant Coach DeWitt Cotton] wouldn’t have it,” he said.

Azzam, 68, retired from coaching the boys’ varsity team at Westchester after 42 storied years comprising 933 wins and 285 losses. That made him one of only a handful of high school coaches in California history with more than 900 career wins.

In 2017, Azzam was inducted into the California Interscholastic Federation (CIF) City Section sports Hall of Fame. His Comets were Los Angeles City 4-A Champions a whopping 15 times, and were Division 1 state champions six times.

With a record like that, there will be no slipping off to a quiet retirement. The school wants to name its gym after him, and toward that end will be holding a fundraiser on November 12 at the Playa Vista CenterPointe Club. The keynote speaker will be former Lakers’ head coach Jerry West.

Tamryn Wilkins is among those organizing the banquet.

“He’s a classy, professional guy with just amazing basketball acumen,” she said. “He’s a genius mastermind who’s been so successful, but he’s also humble. He wants the focus to be on the kids, not just on him.”

Wilkins played for Westchester’s girls’ team in the 1980s and was one of several female basketball players Azzam took under his wing. Their head coach was a good guy who did the best he could, Wilkins said, but when Azzam identified girls with D1 potential, he offered to beef up their skills so they could earn scholarships.

“He didn’t allow us to have any excuses. We ran all the same drills as the boys,” said Tiffany Baskin, who went on to play for Fresno State University and for professional teams overseas.

Although he is often lauded for preparing so many players for the pros, Azzam said he is “just as proud of those kids who didn’t make it to the NBA, who have normal jobs whether it’s a teaching job or at a store or in a factory.”

“Our legacy is not the banners on the walls and the wins and losses and all that stuff,” said Azzam. “Our legacy is our kids who are leading a normal life raising their kids the right way. You don’t see them on TV, but they’re our true measure of success.”

Azzam did double duty as both a coach and a math teacher at Westchester, and always made academics a priority, he said, because he wanted his players to be college and career ready. Although the minimum grade point average to be eligible for sports was a 2.0, Azzam told players they had to earn a 2.5 or higher to start.

If the team’s overall G.P.A. exceeded certain benchmarks, he rewarded players with such prizes as dinner at a restaurant on him.

While it was a lot to leave, he is at peace no longer being at the helm of a varsity team. Not that he’s left the game entirely.

“I’ve latched onto a program near my house,” he said of his part-time gig assisting at North Torrance High School.

He doesn’t need to be in charge, he insisted, something he discovered during the COVID lockdown.

The 2020 season was canceled, and Azzam missed coaching, but not as much as he thought he would. He took advantage of his free time to take up new hobbies such as woodworking. Azzam still builds homemade ukuleles to this day, mostly gifts for friends and family because he says the quality isn’t high enough to sell to strangers.

Azzam returned to Westchester for one more season after what he calls “the lost year” of quarantine, but even then he knew in his heart that it was time to go. He has two young grandchildren in Northern California and a third on the way locally, and he and his wife are looking forward to babysitting.

“The only thing I really miss from Westchester are the relationships you have with the kids, but I’m getting a little of that up at North,” Azzam said.

That doesn’t surprise Ahmaad Cook who played for Azzam in high school and earned athletic scholarships to Ball State University in Indianapolis and Northwest University in the Seattle area.

For countless players, Azzam was a father figure doling out wisdom that went far beyond sports.

“Our conversations weren’t just about basketball,” Cook said. “They were more about life in general.”

Azzam said when he was teaching and coaching, he saw himself as “the extension of the parent,” recognizing that between class, practices and games, some kids spent more time with him over the course of a day than with their own families.

“We had kids we had to bring along academically and socially,” Azzam said. “If you didn’t go to class and weren’t respectful to staff and students, we didn’t want you around, and they usually didn’t stick around.”

Jason Sanders played for Azzam for three seasons before earning scholarships to San Diego State and Azusa Pacific University. He’s a physical education teacher now, and has previously coached track and basketball, including a two-year stint as Azzam’s assistant at Westchester.

“He’s genuine and sincere,” Sanders said. “At the same time, he’s a taskmaster–very demanding, but fair. He’s going to get the best out of you by building personal relationships.”

Azzam said players have to fear coaches a little bit for them to be truly motivated, so he could be tough and set high expectations.

“At the same time, you’re never going to get 100 percent on fear alone,” Azzam said. “I think the kids knew down deep that we cared about them, because we did. It wasn’t just about basketball. If it was only about basketball, I don’t think they would have played as hard as they did.”

Tickets to the Coach Azzam gym renaming fundraiser are $125 per person. Among other things, proceeds will pay for replacing signage and installing new display cases in the gym’s foyer. For information, visit https://comets4life.com/azzam-1.