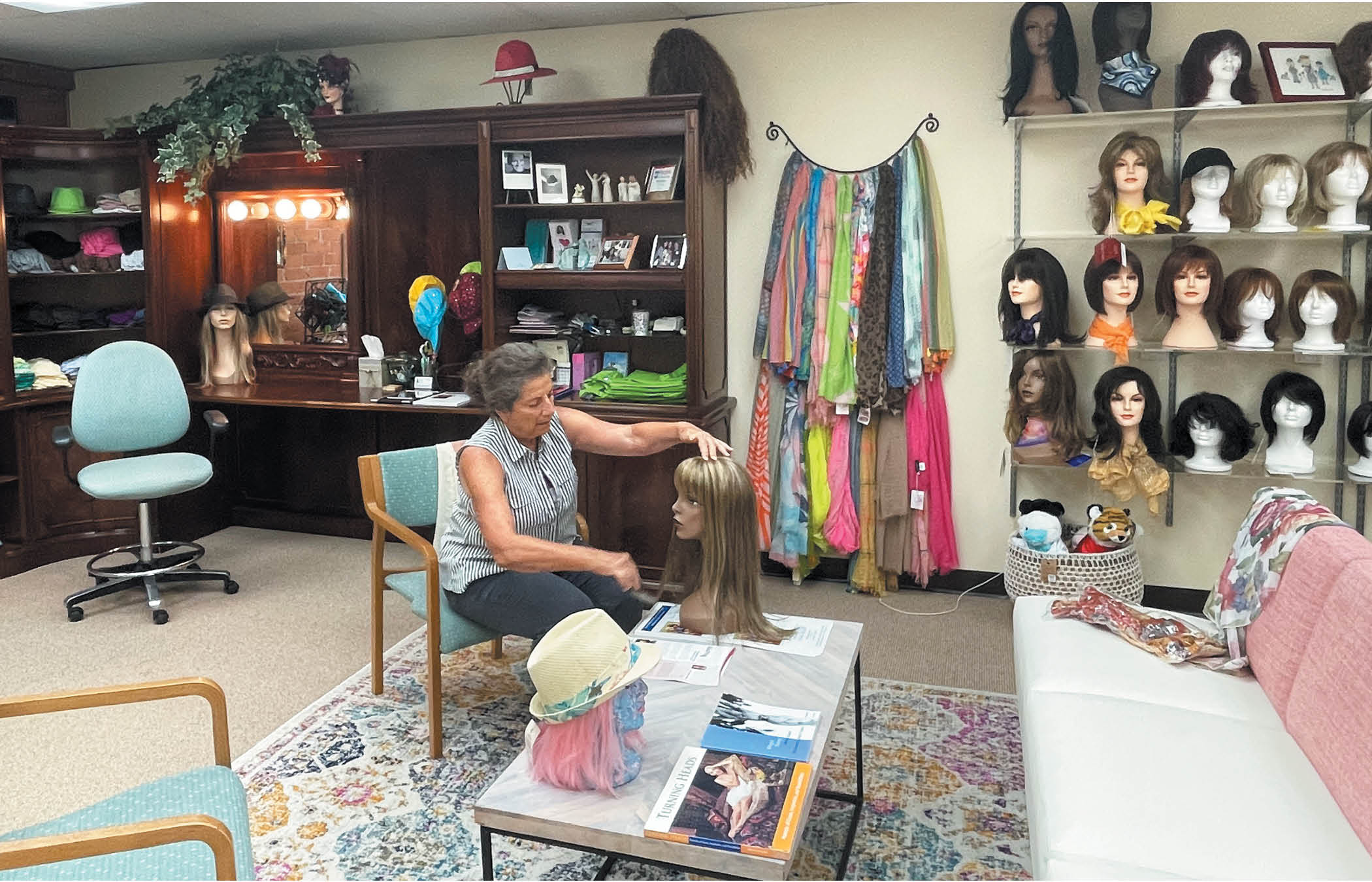 According to the National Cancer Institute, it’s estimated that 287,850 women in the United States will develop a new case of breast cancer in 2022, with breast, lung and colorectal  cancers accounting for 50 percent of all diagnoses. With treatment, the majority of women with these cancers will become survivors. But the road to healing looks different for every woman depending on their resources.

Playa del Rey resident Monica Kahn has never had cancer. But her lifelong best friend Helen Rindfleisch wasn’t so lucky. Helen was diagnosed with lung cancer in 1990. For two years, Helen fought for her life with all the strength she could muster, and despite how sick she might have felt, she took great pride in looking her best.

“She was extremely beautiful,” remembers Monica. “For her, it was very important to get out of bed, get dressed, put on her makeup and look as good as she could.”

Though Helen battled cancer with ferocity and grace, she passed from the disease in 1992, leaving Monica heartbroken. To honor her friend, she began to volunteer at the bygone Daniel Freeman Memorial Hospital as a RIG (resource, information and guidance) Volunteer in the oncology department. After seeing how many women showed up to chemo in simple shower caps or with no head coverings at all, leaving their bald heads exposed, Monica knew her friend Helen would want something better for them. Monica asked herself: could there be a way to help these women to feel good about their appearance and gain confidence while the chemo ravaged their bodies? Monica knew the answer was yes and decided to create Helen’s Room in 1998.

Starting out in a room the size of a small doctor’s office at Daniel Freeman, Monica raised money herself with the mission to serve low-income, uninsured and underinsured women as they battled every kind of cancer and provide them with free wigs, headwear like hats, turbans and scarves, breast prostheses and mastectomy bras. Monica knew from Helen that looking better during chemo could raise a woman’s spirits, but says she was surprised by the one aspect that women struggled with most.

“If I hadn’t been doing this for so long, I would never have realized that the hair loss for almost every single woman, I’d say 99.9 percent, is the most traumatic event. They will apologize to me and say they feel vain, they feel silly–they’re dealing with a life-threatening disease, but what are they most traumatized about? Hair loss!” she says. “It is huge, so when someone comes in, they sit and share first. It’s an environment where they can come in and cry. They talk about where they’re at emotionally, and then we start fitting wigs and hats. Wigs can be very beautiful. People can walk out feeling reinforced, feeling good about this particular part of their illness, and that they can handle this.”

Monica says it was important from the beginning to provide all items and services–including weekly support groups–for free. She never asks about a woman’s income. She relies on donations and sometimes uses her own money, if necessary, but wouldn’t have it any other way.

“It took me a long time to realize the only way I can do this is to focus on the positive, on what I can do for them, and not what I can’t do,” says Monica. “I cannot change the medical outcome of their disease, but if I can make a difference in this huge part of the disease, then it makes me feel pretty good. They walk out an hour later with a free bag full of beautiful, brand-new goodies.”

Board member and long-time volunteer, Naomi Jones was at the opening of Helen’s Room in 1998.

While serving this community helped Naomi to heal, she never felt the need to use Monica’s services during her own battle with cancer. But another board member, Jane St. John, did reach out.

A three-time breast cancer survivor, Jane’s last cancer treatment was in 2020, and she had to have a double mastectomy.

“After that surgery, I got on the phone to Monica and said, ‘I need you!’” says Jane.

“I went down and we tried on several bras, and I’m now wearing the most comfortable bra I’ve ever had since 1989,” she says, adding that due to complications, one side of her chest was left indented. “I have different sized prostheses that both fit. If you look at me in clothes you probably wouldn’t know that I’ve had a radical double mastectomy!” says Jane.

Jane also asked Monica for help finding a wig when she lost her hair after her second round of breast cancer. Her own hair started to grow back in a sparkling silver color which was difficult to match. But Monica found two wigs Jane loved.

“I wore that wig from December until June. But Monica bought me two so all I had to do was swish it around in the sink then fluff it back up on the foam form,” said Jane. “You put it on the next day and off you go!”

While Helen’s Room has been located in a few spots over the years, Monica is happy that her nonprofit has found a home in the Paradise Building on Sepulveda in Westchester, not far from her home in Playa del Rey. The beautiful space is about 1,000-square-feet, with a sitting area and a changing room. Although there are a lot of responsibilities in running an organization with such an important mission, she’s confident she can face any challenges that come her way because she loves what she does.

“The work is my lifeline,” says Monica. “It’s what keeps me going.”

If you or someone you know could benefit from Monica’s services at Helen’s Room, please call (310) 524-9429 or email mkahnhelensroom@aol.com. All services are by appointment only; they are unable to accommodate walk-ins to ensure the privacy of their clients.